All our campaigners experience, or have experienced, staring on a regular basis.

Twenty-year-old Hannah, who has Goldenhar syndrome, first became aware of staring when she was 10. She says:

“It makes you feel like an outcast to society. You feel like there’s something wrong with you and it confirms or adds to your insecurities of feeling judged for looking different. It makes you paranoid and constantly on edge.”

Chrissie, who sustained burns when she was three years old, says:

“I get stared at every single day and it’s all I’ve ever known. When I was younger, I hid away from the world. After school I’d go straight back home and cry and I used to think ‘this is going to be the rest of my life. 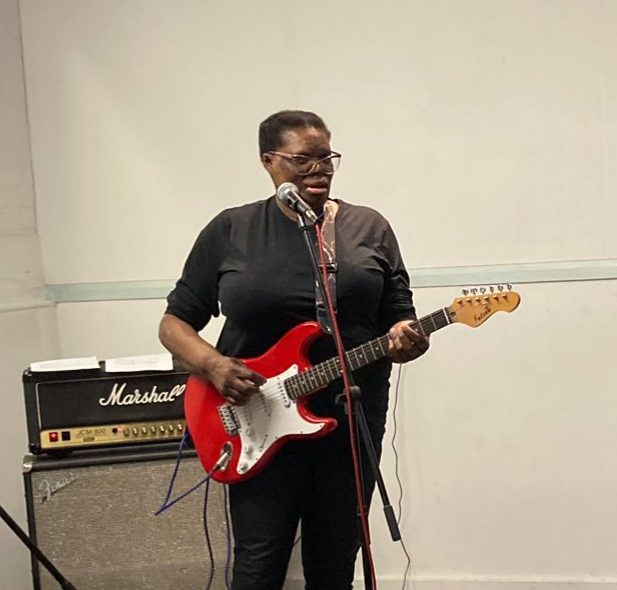 Chrissie loves singing and dancing and is in a band.

“Then I discovered the arts and dancing, and after studying a degree in contemporary dance with a love for singing, my self-esteem was boosted, and I began to make my way in the world.”

“I call stares the silent killers. When someone stares it can make you very anxious. I’d be left thinking about what was going through their head about me.”

Sophie, who has scarring on her face following a car accident, believes people need to understand the psychological effect that staring has on someone with a visible difference.

“When the staring starts, you can see the cogs in their brain turning, trying to figure out what happened. You know you are forced to re-live the traumatic experience and are not able to forget.

“There is a difference between a stare and a glance. To put it simply, if you catch the eye of the person you’re staring at – you’ve been looking at them for too long. It is uncomfortable for the person you are staring at. A little acknowledgment of accountability or smile won’t solve everything, but it will diffuse the situation.” 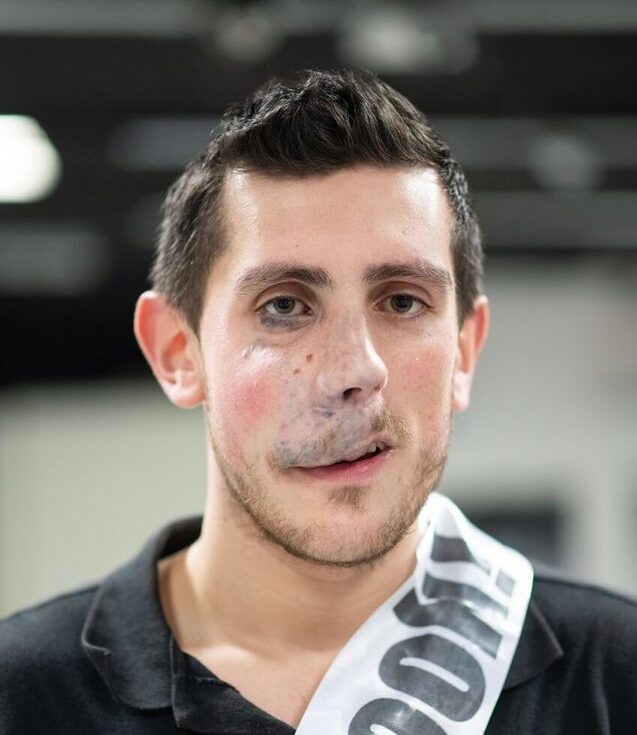 Laura, who has alopecia, has found a way to reclaim control of these stares.

“I’ve found a new way to express my creativity and often wear a bright pink wig.

“The public need to realise the impact of staring. It can really affect the confidence of someone, like me, living with a visible difference. We are all human beings. Manners, respect and kindness go a long way.”

Staring is common on public transport

Many of our campaigners receive staring while on public transport.

Laura finds getting on the train particularly difficult. She says:

“I’ve experienced people becoming more brazen with their stares, which can be cold and interrogating. It is very dehumanizing to sense that someone is looking at you, and sometimes, even when they catch your eye, they don’t smile or look away.”

When Chrissie was in her twenties she didn’t know how to deal with stares on public transport.

“I’d be sitting on a bus, and I’d see someone staring, so I’d stare back, and they wouldn’t look away. I didn’t have the words to say anything back then, but now I do say something. I ask them not to look at me like that as it makes me feel uncomfortable. Sometimes they smile or turn away.”

Jude, who has psoriasis, shares her experiences of staring and public transport:

“What may seem like a few seconds of staring at someone with a visible difference on the bus, feels like a lifetime to the person experiencing it. I’ve had times where staring has sent me into a spiral of anxious thoughts, when I’d otherwise been very happy going about my day.

Naomi, who has ptosis of the right eyelid, has a good strategy to avoid stares on public transport getting to her. She says: “Nowadays when I’m commuting to work by bus, I’m immune to stares. I cocoon myself in my own bubble with my headphones.”

What to do when your child is caught staring

Children are inquisitive and although we’re taught it’s rude to stare, some of our campaigners like to interact with children to teach them about visible differences.

Naomi is a Play specialist and likes to teach the children in hospital to celebrate differences.

“My job gives me the perfect opportunity for inquisitive children to ask questions and be curious – and I’d rather people just ask me. We are not all made ‘perfect’, and everyone is different, and we should be celebrating those differences.”

Shannon, who has a facial birthmark, says: “Children ask questions about visible differences, it’s in their nature, and it’s important parents let them do so to avoid behaviours like staring becoming part of their adult life.”

Emma, who is an artist with a visible difference, prefers parents to open dialogue with them when their children stare. Emma says:

“As I’ve got older, I’ve appreciated when children and parents sometimes come over and speak to me when I’m out and about in a welcoming way. I prefer this approach to parents who drag their children away, which makes me feel ignored and excluded.” 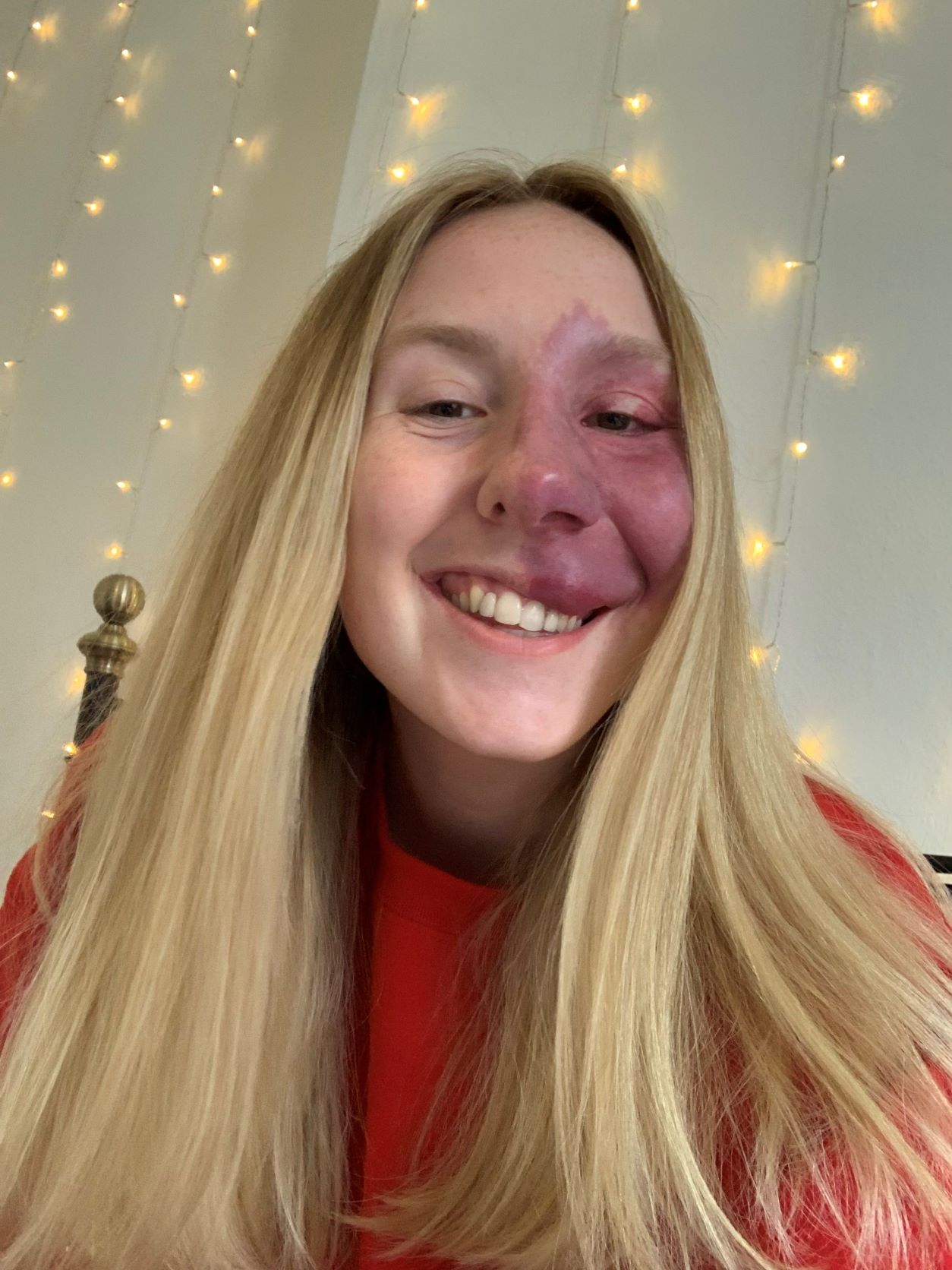 Eleanor likes to interact with children who stare so they can learn about visible difference.

Eleanor, who has a facial birthmark, recalls a memory from university that has stayed with her:

“At Uni, I was out for brunch with my friends, and some children sitting with their family were staring at me. Usually when kids stare, I smile and they smile back, but in this instance, the parents got involved and told them off for wanting to ask questions and told them to look away.”

“When you look at the adult’s reaction, it’s clear that it creates a negative void where the children could then assume that a birthmark is something scary. If they’d just allowed their children to come and ask a question, they’d see me as a person. It’s much easier to diffuse a situation with education.”

But how can we work together as a society to stop staring from happening? Our campaigners believe in the power of representation to dispel the ‘otherness’ of having a visible difference. More representation will lead to more acceptance of difference.

Ryan, who has a cleft palate, has some interesting thoughts on representation. He says:

“People often stare at what they consider to be unfamiliar, so if those with disfigurements and visible differences were better represented and recognised as a legitimate part of society, the temptation to stare would decline.”

“Representation matters. It not only reflects society but will create a greater understanding of visible differences and stop staring from taking place.”

“Society and lack of representation has created problems with unrealistic beauty standards. I can’t believe in 2022 that staring still goes on, and that people haven’t learned and moved on.”

Amba, who was born with a birthmark that covers her face and body, suggests: “more positive representation in TV and films is needed, as so often, people with visible differences are represented negatively.”

Our campaigner Isobel runs inclusive and diverse ‘fat life drawing’ classes. She has a visible difference and has experienced staring during her life. This year, for Face Equality Week, Isobel is working with other models who have visible differences to respond to the ‘Stop the Stare’ theme with an empowering re-frame that invites participants to ‘look with purpose, positivity and respect’.

“My sister and I have created inclusive life drawing classes that celebrate diversity, where models feel safe to be themselves and be seen.

“People with visible differences are often disempowered by stares, which can lead to not wanting to be seen. This affected me more when I was younger, and to think of this happening to young people today is frustrating as growing up through teenage years is difficult enough as it is.

“Staring is a result of a lack of representation in popular culture, which creates this element of ‘surprise’ at seeing someone different to you. I’d encourage anyone who catches themself staring at someone with a visible difference to diversify their social media feeds. ”

Can you help us Stop the Stare? Share our campaign film with your friends, family and colleagues so more people understand the negative impact staring can have.

Face Equality Week is an annual event to raise awareness about the prejudice experienced by people with visible differences. In 2022 it was 16-20 May.