There is some treatment available for people who have port wine stains. To date, I have had 24 laser treatments under general anaesthetic, from when I was a baby until the age of 16. I stopped treatment then because I wanted to focus on my GCSEs and A levels. I took a break, but just haven’t started again. I’ve gone to uni and haven’t had the time, but also, I’ve just not really felt the need to start again.

Whilst hospital is usually not a “normal” part of childhood, my parents just treated it like it was. For me the hospital appointments and treatments were just something that we did. We went every couple of months, and it was just our norm – and I always liked having a few days off school after laser treatment! I knew it wasn’t something that everybody did because my brother didn’t have to go and friends at school didn’t, but that was fine because it was my life and just what we did.

Being able to see other people with a birthmark in hospital and through the work Changing Faces does has helped me so much. As there were (and sadly still are!) very few people to look up to in the traditional media with a visible difference, creating that visibility and showing diversity can help so many people.

Seeing other people with visible differences really helped me to be more comfortable with my birthmark because when I saw them, I knew I wasn’t the only one. Knowing that there were other people out there similar to me, meant that I became quite open about my difference. If people want to know about my difference, or ask questions, then they find out quite quickly, as I will tell anyone who will listen!

I was quite comfortable at school and although I had some incidents where other kids were mean and rude, it was generally a good experience for me. I found it became a lot easier in school when I made sure people knew I was accepting and comfortable with my birthmark. Because I am not bothered by my birthmark, then why should other people be? 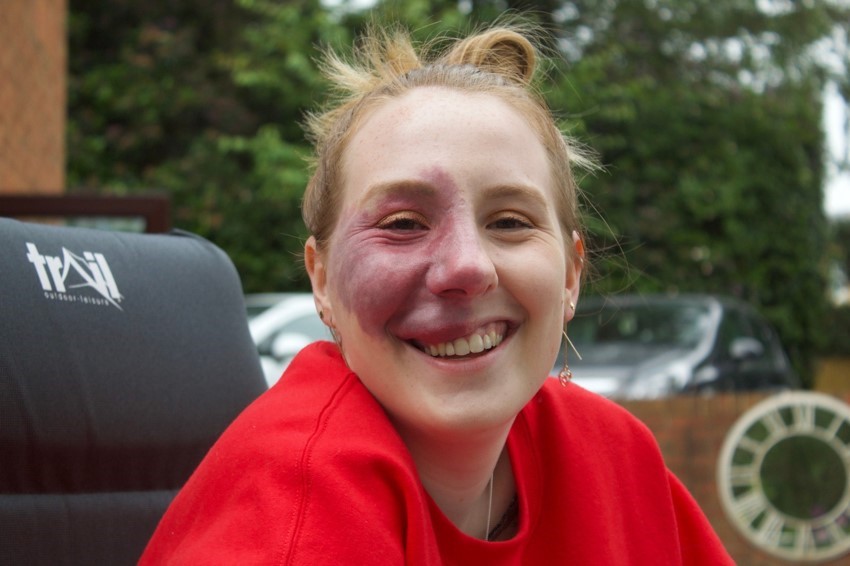 Eleanor, who was born with a port wine stain birthmark on the right side of her face, is a Changing Faces campaigner.

However, outside of school has not been quite as easy! It is a pretty regular occurrence that I get stares, and people make comments as well. More often than not I just sort of move on and forget about it but sometimes it can be trickier and it’s not always the most shocking incidents that hurt the most.

One time during my first year at uni, I had gone out for coffee with some friends. Some children started staring and I could hear them talking to their parents about me and asking harmless questions, but that wasn’t the upsetting part of it. It was because their parents were so dismissive and tried to pull them away. They made a big deal out of nothing.

In a perfect situation I would have been more than happy if they had just smiled and talked to their children about difference, or come up to me and asked me about my visible difference nicely and showed them that there’s nothing wrong with me and it doesn’t need to be made into a big deal.

I didn’t realise how much it had actually upset me until we got home, but my friends were great, and we talked about it all. I think it’s because of times like these, that in the long term it is the setbacks that have pushed me forward and made me more confident.

I am now at a great point and have had some amazing opportunities to speak out about living life with a visible difference. I’ve had articles about me in the Daily Mail and Metro, I’ve been interviewed on BBC Radio, featured in a short film showcasing some amazing people with birthmarks and I recently became a Changing Faces campaigner!

Changing Faces campaigner Shannon shares what it took to embrace her birthmark and how social media has been helpful.