My name is Mikaela. Until recently, I was a campaigner for Changing Faces, an experience I’m very, very proud of. A lot of my campaigning work came in the form of Twitter threads and other online writing, and if you’re familiar with me, you’ll know that a) I’m a trans woman, and b) I like talking about it, especially in disfigurement and visible difference spaces.

I am a white, disfigured, queer, non-binary trans woman. Sure, I’m “more than my labels”, but they’re not ‘just’ labels. I always say that I wouldn’t be me without any of those aspects, and today’s a great day to talk about why it’s especially important to me to identify as a disfigured trans woman.

We can cut to the chase: most of the time, as a disfigured trans woman, I feel pretty alone. Not necessarily lonely, but there aren’t many other folks like me that I can look at or talk to. I definitely can’t look back to my childhood and say, “They were a visible role model to me,” about anyone.

And visibility’s a tricky thing. It’s why I applied to be a campaigner with Changing Faces in the first place, way back in December 2018. I wanted to be that disfigured trans woman who proves that we exist, and not only that we do exist, that we can, and will. Imagine a kid with a visible difference, whatever their assigned gender (or relationship with it), seeing me and thinking, “That could be me, or any number of my friends, and that’s okay!”

Trans kids, including trans kids with visible differences ad disfigurements, deserve love and care, safety and validation: from their families, from their friends, from their doctors, from their communities. From all of us.

And – a message directly to my younger self – it is not too much to ask, to have ‘another thing’ on top of being disfigured and needing surgical intervention for it, even if the world says (wrongly) that the ‘thing’, transness, is an unnecessary, dangerous, ill-conceived ‘choice’. 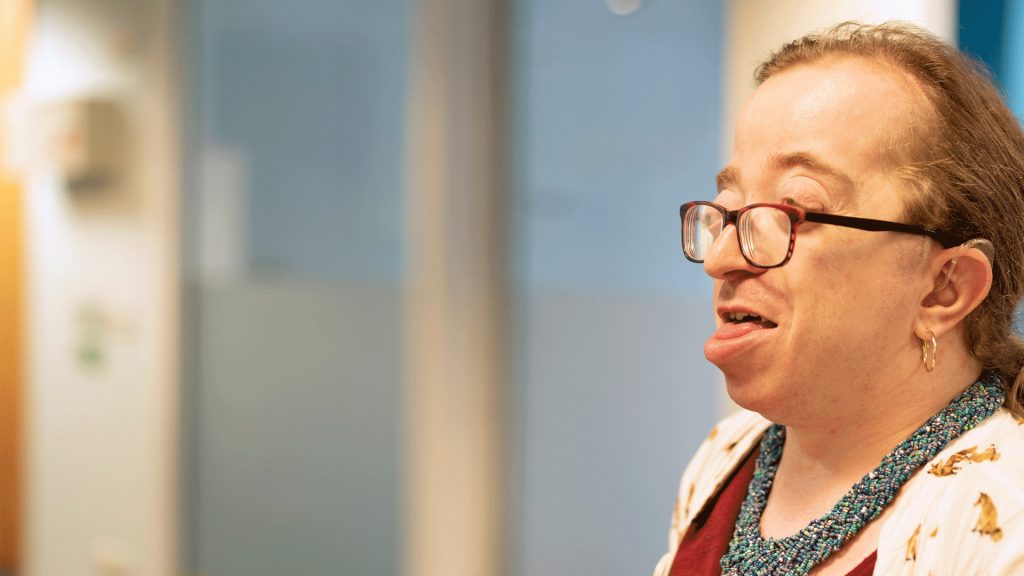 Mikaela is a Changing Faces campaigner

The world keeps shouting these nasty things at trans people, and especially at trans kids (and their parents); this is how visibility becomes a tricky thing, a double-edged sword sharpened.

I’m writing this sitting in my girlfriend’s apartment in Florida – an immense privilege in many ways. I got to travel here and be with the person and people I love most in the world. But parts of this state, and many parts of this country, and many people back home in the UK think I’m dangerous for existing, even more so for wanting to protect, uplift and inspire trans kids.

Visibility makes things risky sometimes. On a personal basis, whether at home or here in the USA, I’m never entirely sure if my Adam’s apple, or my voice, or the hairs on my legs and arms (should I choose to bare them) will be clocked, or what danger I could be in if somebody takes exception to how I present myself. Especially when I’m also disfigured. To be clear: I’m not ashamed of any of those attributes (but many people want me to be).

More commonly for me, though, is the risk I take, that any trans person takes, when we show ourselves online. It is not uncommon for me to receive nasty or patronising (even fetishistic) responses to my selfies, or to any images of me. Even what I’m writing now has the possibility of leading to anything from a dribble to a stream or torrent, of abusive comebacks.

But two things are important to note: as a middle-class, white British disfigured trans woman, I’ve been incredibly advantaged in being able to receive care for my medical needs and my transition, and from my family and friends. It hasn’t been easy, but I have it far better than trans people of colour, disfigured, disabled or not, who face far deeper social, economic, even legislative injustices.

The other, simple thing is: I’ve got to say these things. I’ve got to exist. I’ve got to be visible, when I am able. Because if I’d seen someone like me when I was eight, 12, 17, I’d have known what was possible. I’m here because I’m here, and maybe in the future, more folks will be, because I was.

As many have said, and I’ve hopefully contextualised, ‘happy’ can be a complicated emotion for trans folks today. So I’m wishing a peaceful Transgender Day of Visibility for all trans people; especially for the trans folks of all ages and experiences who can’t and/or don’t want to be visible, and especially for the disfigured trans kids right now, who just deserve it to be their choice.

Mikaela is 28 and has a genetic disorder called Crouzon syndrome. She sees her visible difference as a positive.

Karen's skin condition caused her a tough time at school and university. But moving to Australia in her twenties changed her outlook on life.