“What is that on your neck?”

These are just a few comments that I’ve received from children and adults alike about my skin. Comments that made me realise that I wasn’t what society deemed ‘normal’. I was always aware my skin was different, and while at a young age I wasn’t faced with bullying (that came later), I was still extremely aware that I had a visible difference.

I have a neurological condition called Neurofibromatosis Type 1 (NF1). It’s a condition caused by a genetic abnormality (it can either be hereditary or a spontaneous mutation – I am the latter). NF1 causes ‘café-au-lait spots’, or coffee-coloured markings or birthmarks which form in large patches all over the body. I have large patches all over my neck, chest and back. 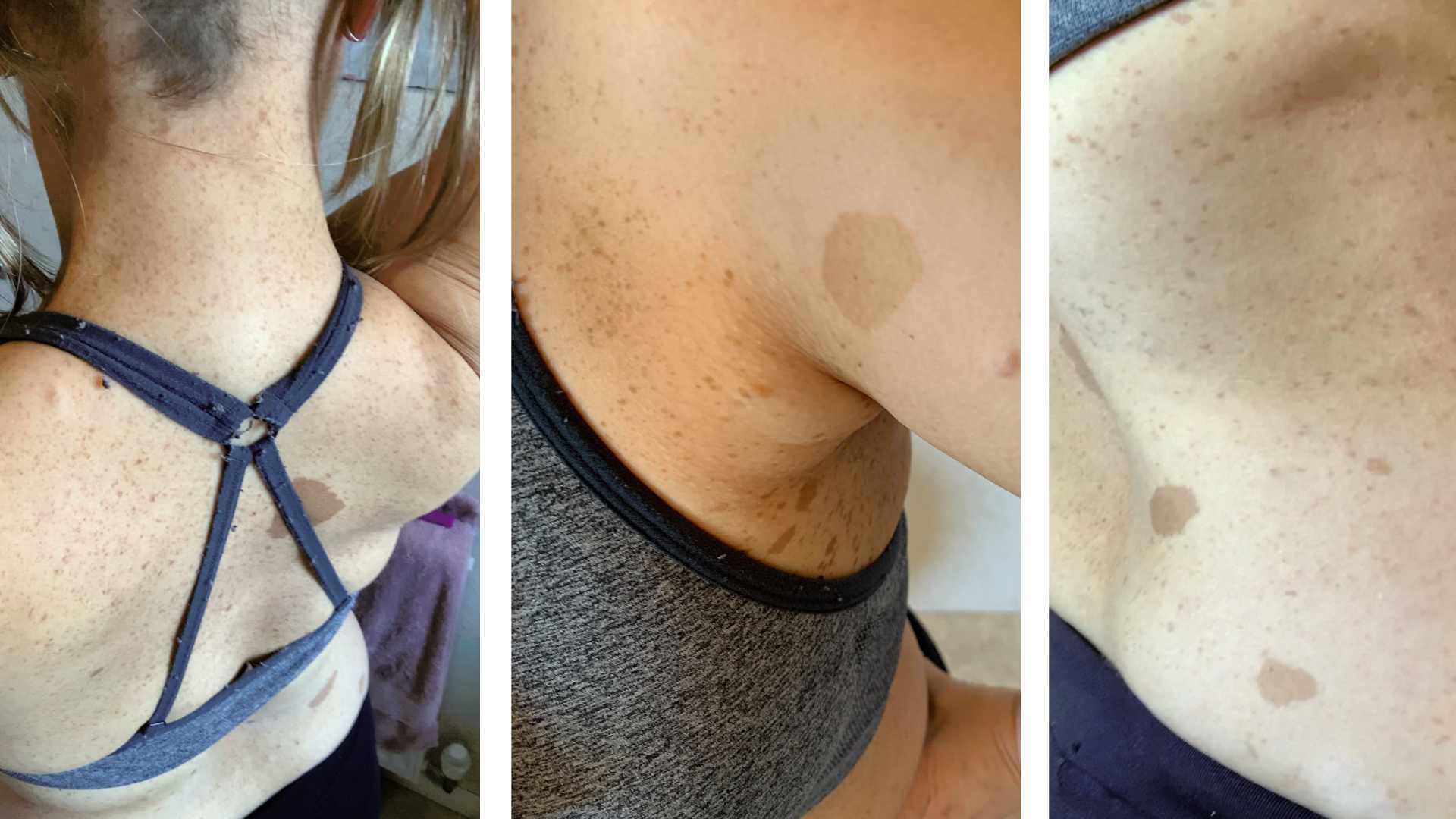 Karen’s skin condition means she has coffee-coloured markings or birthmarks which form in large patches all over her body.

NF1 can also cause fibromas (or external tumours) to grow on nerves endings, something I am beginning to experience.

I was diagnosed at age 15 by chance, when I visited a dermatology consultant for another condition. I developed alopecia at this age, so I was dealing with a huge amount of emotional turmoil. Losing my hair exposed more ‘café au lait’ spots on my scalp which was one of the factors that led to my diagnosis.

The bullying really began when I was about ten or 11 years old. As a young child, I was outgoing, adventurous, and loved being outdoors, but this quickly changed when I joined a youth group and was bullied for the markings on my neck. Suddenly, I was surrounded by children slightly older than me, and I was exposed to attitudes that I had never experienced before.

I soon began to question what a ‘normal’ body looked like, and I became very insecure and anxious – before I’d even started secondary school! 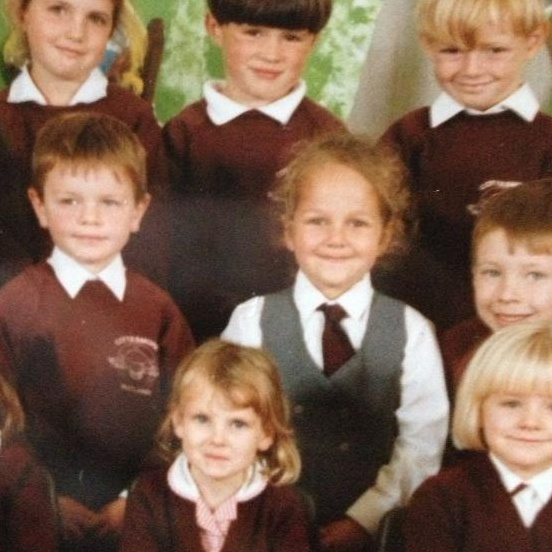 Karen, at the centre of the photo, in primary school.

Secondary school was a bag of mixed experiences. While I did have a good group of friends, I wasn’t immune to the ‘mean girl’ groups (that all schools have). I was regularly subjected to comments and nasty questions which made me feel incredibly uncomfortable.

I would hide away at breaks, walk with my head down and I hated having photos taken of me. Considering I was dealing with the impacts of alopecia as well, I would avoid any social interaction outside of school as my confidence was slowly being destroyed.

I avoided cameras at all costs – I didn’t want a reminder of my appearance. I would also wear clothes that covered as much of my neck and shoulders as possible – I’d never dream of wearing strappy tops in summer!

This was a time before social media even existed, something I am incredibly relieved about. I couldn’t imagine being a teenager in today’s world with a visible difference. I even avoided the typical magazines that girls my age read as it made me feel so horrible. Difference was just not represented in 2002.

Following on from school, and my A Levels at college, came the university experience. I was suddenly thrust back into the whirlpool of anxiety and fear any time I met new people. While it wasn’t to the same severity, I found myself avoiding socialising, or dating because of comments from guys. I remember once having a crush in my first year, and he knew, but one night he turned and looked at me, with his eyes on my neck he said “Erm, I’ll go out but not with you!”

My internal loathing and anxiety reached boiling point, and support was limited. The university wellbeing group were useless and made me feel worse for seeking help. They just didn’t know how to help, or what to do. There was no empathy, or attempt at understanding. Instead, they treated me as a victim of bullying, which was not what I needed.

I was thankful for the small group of friends I had made, and my flatmates – they somehow managed to keep me grounded.

Fast forward to 2016 – I was then 26 and preparing to go backpacking around Southeast Asia before heading to Australia for three years. I was nervous about being surrounded by people I didn’t know again, but backpacking was something I’d been planning for a long time. I thought to myself “I survived school and university – I can do this!” 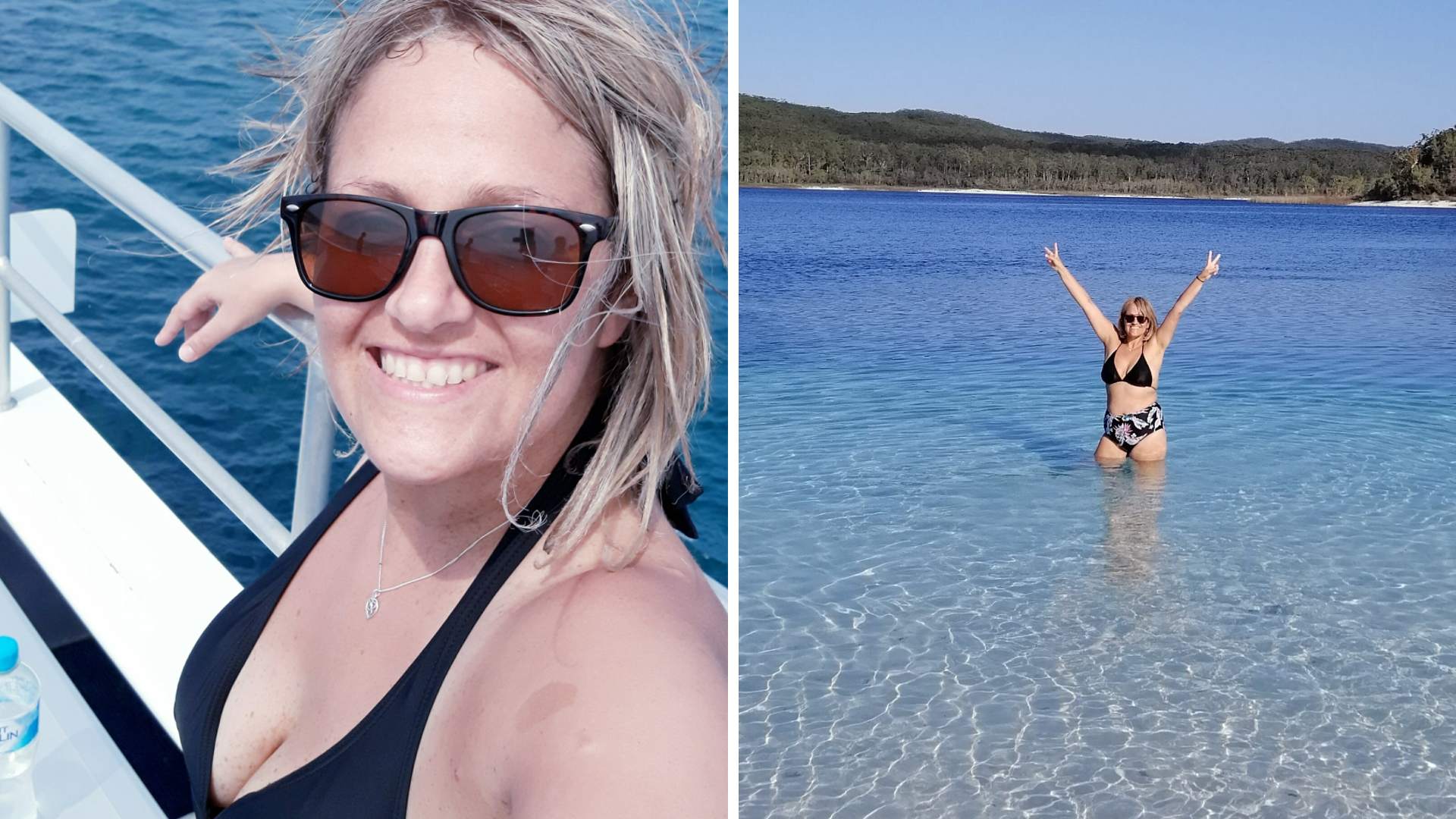 Karen’s outlook on life changed in Australia and she now embraces her difference.

I began to feel more equipped to take control of negative thoughts and my self-esteem. I learned to love myself and developed new ways of thinking about my skin. I found that no-one questioned my skin markings. I may have had some glances, but I had learned to not pay so much attention.

It’s taken a long time to get there, but I now love that my skin is different. There is nothing ‘wrong’ with my skin, it’s just a different colour in places. I do wish I had this lightbulb moment sooner, but if I had, I doubt I’d be sat here writing this right now. I’m still working on my inner voice, but I fully believe that I can own my difference as it makes me….me!

Katy, who was born with Goldenhar syndrome, understood that she needed support to change the way she saw herself.

Talking about Ramsay Hunt Syndrome and her facial paralysis online has helped Nicoya build confidence and accept her visible difference.

Sophie shares what being a woman with a visible difference means to her.