From a young age, I knew I looked different, but I didn’t think anything of it until I was six years old. That’s when I became aware that my facial differences attracted unwanted stares from strangers, especially on public transport and in crowded places. I remember people nudging their partners or friends when they noticed me, the whispering and obvious giggles.

I have Goldenhar syndrome – a rare craniofacial condition that can cause incomplete development of the bones and muscles on just one side of the face, and defects in the eyes, mouth, ears and spine.

I have an underdeveloped right ear and wear a hearing aid in my left ear. My jaw is also affected and I was born with a cleft lip – I have a slight speech impediment. I also have a condition called scoliosis which caused my spine to curve.

As I grew up, to cope with the staring, I would always try to put on a brave face, smile, and not let it get to me. But, in reality, it wasn’t good for my mental health. It saddened me that sometimes people didn’t even realise that they were staring. Or sometimes they did – and were ignorant of the hurt they were causing. 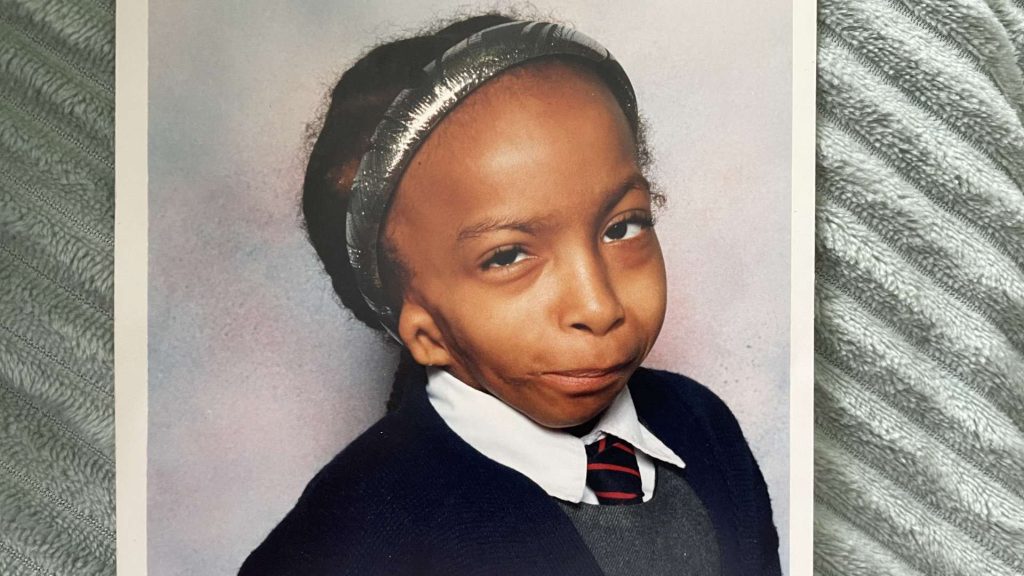 People’s negative reactions made me feel insecure with the way I looked. I started to compare myself with others, wishing that I looked ‘normal’ like them. I thought I wasn’t ‘pretty’ – I was ’ugly’.

Soon, I was completely uncomfortable in my own skin. It got so bad that I had my underdeveloped ear removed before starting secondary school. I decided to have an artificial ear made, because I wanted to look and feel ‘normal’ with two matching ears like everybody else.

Starting secondary school was an anxious time for me. I worried about how everyone was going to react to my visible difference. But overall, I had a positive experience and made friends and felt accepted. 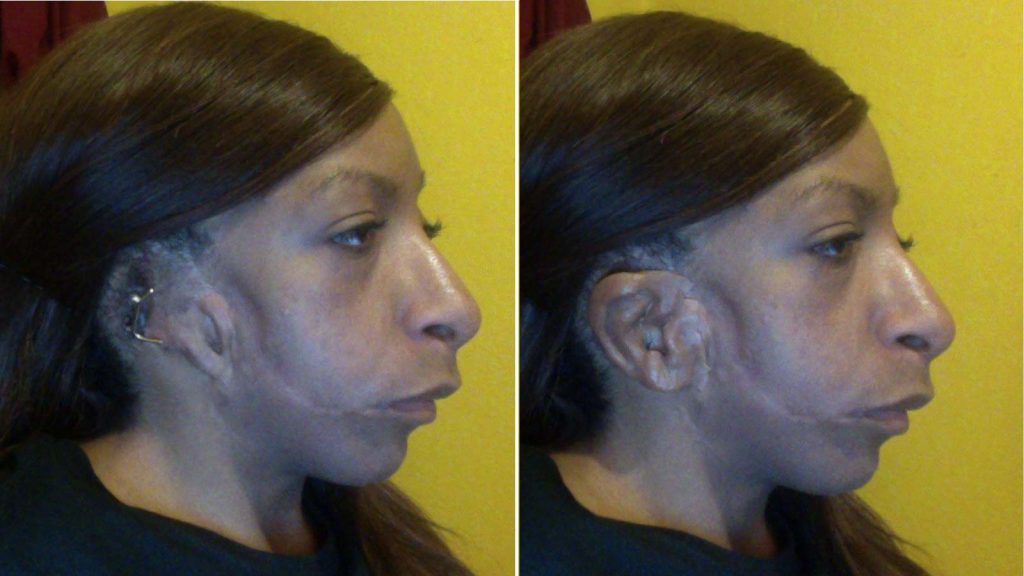 Katy had surgery before secondary school, to replace her underdeveloped ear with an artificial one.

Despite feeling accepted at secondary school, there was one incident that I’ve never forgotten.

I was in the school dinner hall when I noticed that the girl sitting next to me kept looking at the scar on my face. It didn’t bother me at first because I thought she was being curious. I smiled politely and began to eat my school dinner. Two other girls kept looking over to me and then looking away (trying to be polite). Then I realised that the girl sitting next to me was mimicking the way my mouth looked – by dragging her mouth across her face. I got upset and felt so embarrassed – I didn’t know what to say.

No one around me said anything to her, or stood up for me – and I didn’t have the courage to either. I never did tell a teacher about it, although I wish now that I had. Fortunately, that was the only time the girl did anything unkind to me.

When I was 12 years old, I had a major operation on my back where a metal rod was placed in my spine. This wasn’t a choice, I needed the operation to help prevent my spine from curving even more. The doctors said that if I didn’t have it, I would need a wheelchair in the future.

I was grateful for the operation, but it stunted my growth, and as my friends grew taller, I stayed the same size. I’m still 4ft 7.5 inches. Being small added to my insecurities. When I became an adult, I didn’t always feel like one and was often viewed as a child or a teenager by strangers. Even today, at the age of 37, some people still think I’m a child. 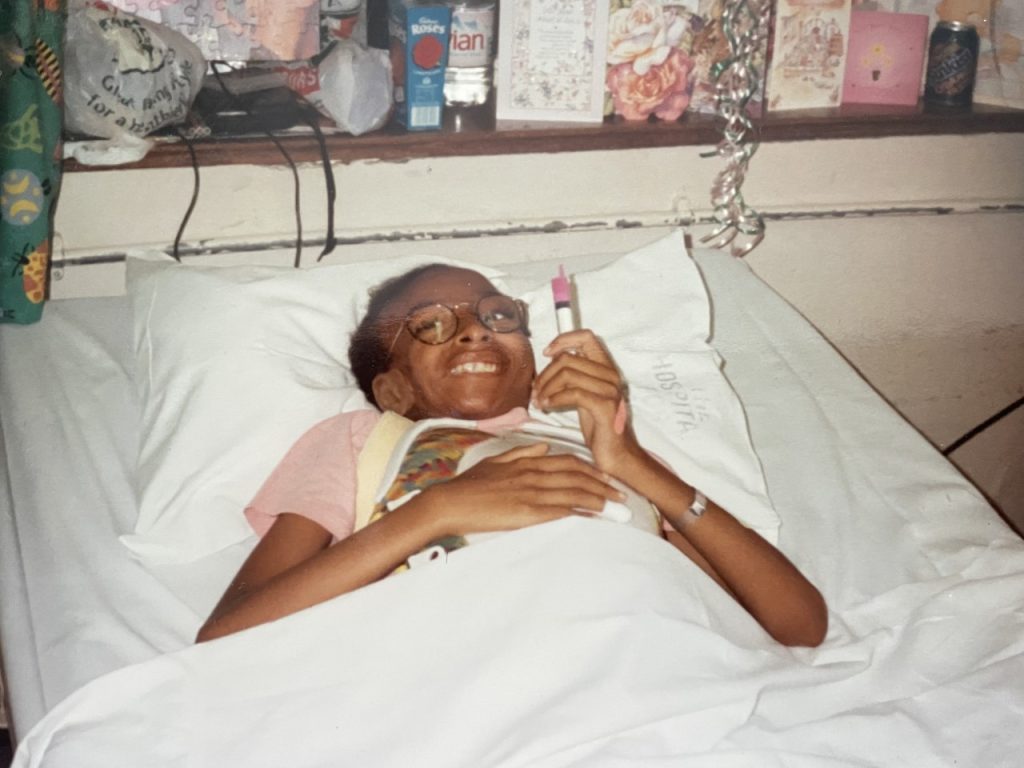 Aged 12, Katy had an operation to prevent her spine from curving even more.

For a long time, my visible differences affected my mental health and I knew that I needed support to help change how I viewed myself. I didn’t want to feel so worried about how I was perceived by other people because of my appearance. So, I took action. I spoke to a therapist and to my family and close friends about my struggles. I found that talking about it helped. Instead of making me feel ashamed or weak, it made me feel stronger and braver.

Fast-forward to today. I have learned to love and accept my facial and body differences and I am currently on a journey of embracing my differences with confidence. I have an Instagram account where I share my story to connect with people and inspire others.

My advice to the world would be: don’t let yourself be defined by how others react to you based on the way you look. You are so much more than just a face and body. Have the courage to speak to someone if you are struggling. You won’t be seen as weak but a strong and brave person – you’ve got this!

Read about our new strategy

Talking about Ramsay Hunt Syndrome and her facial paralysis online has helped Nicoya build confidence and accept her visible difference.

Our Chief Executive, Heather, shares how we developed our new strategy and ambitious goals.

Our campaigner Ryan shares his views on why support and awareness raising are key to our new strategy.