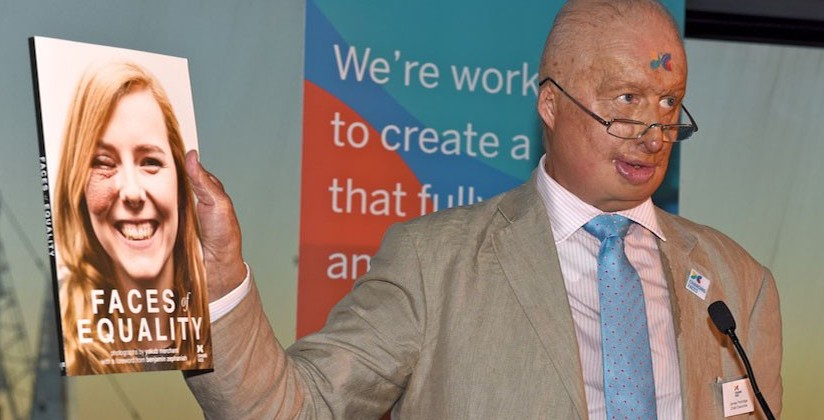 James holds a copy of the book, Faces of Equality, which was published in May 2017

James was an unequalled, passionate and tireless champion and pioneer for people with disfigurements and the global campaign for face equality.

Back in 1970, when he was 18, James was severely burned in a car fire that changed his face, and his life, forever. After a period of recovery in intensive care, he spent a gruelling “gap year” in hospital having reconstructive surgery for the 40% burns to his face and body, before going to Oxford University as planned.

Throughout every vacation and the whole of his third year at university, he underwent extensive plastic surgery, to his face especially. He graduated in politics, philosophy and economics in 1975.

After graduation, James embarked on an MSc in medical demography at the London School of Hygiene and Tropical Medicine. This led to academic appointments in health economics at St Thomas’ Hospital and Guy’s Hospital, London.

In 1979, he exchanged academia for farming, before taking a part-time teaching post in A-level economics, in Guernsey, where his wife, Caroline, was born and brought up. However, James was determined that the unique insights gained during his prolonged recovery should be put to positive use. Early mornings in the milking parlour were interspersed with periods of writing. This culminated in the publication by Penguin of his book, Changing Faces: The Challenge of Facial Disfigurement (1990).

The warm response to the book led him to relinquish life as a dairy farmer and found the charity Changing Faces in 1992. James sought to develop, build on and disseminate the lessons he had learned, and to work for the human rights and inclusion of people with facial and bodily disfigurements.

From the outset, the charity has been underpinned and informed by academic evidence and research. After several seminal research projects were conducted with Dr Nichola Rumsey at the University of the West of England, Bristol, Changing Faces partnered with the University in setting up the first Centre for Appearance and Disfigurement Research in 1998.

This is now an internationally-acclaimed research centre, known as the Centre for Appearance Research, and has 28 attached academics. The University of the West of England recognised James’s contribution to academic research by granting him an honorary doctorate of science in 1999.

During James’s 25 years of leadership, Changing Faces had a number of notable achievements.

Changing Faces was at the forefront of attempts to advocate for and instil new approaches in UK healthcare that fully recognised and addressed the psychosocial needs of patients with disfigurements and their families. These included:

Changing Faces successfully lobbied for people with disfigurements from any cause to be protected from discrimination in the Disability Discrimination Act 1995 and latterly, in the Equality Act 2010.

Changing Faces launched the campaign for “face equality” in 2008 with award-winning posters on the London Underground. They followed this up in succeeding years with eye-opening initiatives, including in November 2009 when James was a guest newsreader for a week on Five News – he was the first person, worldwide, with a disfigurement to do this. Then in 2012, the film Leo  featuring Michelle Dockery, star of Downton Abbey, was shown in cinemas nationwide to challenge the lazy use of scarring in the movies.

In May 2017, Changing Faces created the UK’s first Face Equality Day coinciding with the publication of Disfigurement in the UK (PDF 4MB), which graphically described the injustices and low expectations experienced by people with disfigurements. It also published the book, Faces of Equality, with superb photos by Yakub Merchant and a foreword by Patron, Benjamin Zephaniah.

In November 2018, supported by nine NGOs from across the world including Changing Faces, James launched Face Equality International (FEI) with the aim of internationalising the campaign for face equality and turning it into a movement.

For 30 years James served on many committees and panels bringing disability, human rights, user and lay perspectives to bear on a range of subjects. He served on the Department of Health’s national burn care group, the appraisal committee of the National Institute for Clinical Excellence (NICE) and the Chief Medical Officer’s expert panel on cosmetic surgery. He also chaired the Department for Work and Pensions’ employer engagement steering group.

James was recognised as a charismatic speaker and influential advocate and took part in many documentaries, panel discussions and media interviews on disfigurement, disability, inclusion and social entrepreneurship in the UK and internationally. He was an associate of the Business Disability Forum and Business Disability International. James also held various honorary posts including on Ambitious about Autism’s development and public affairs committee. He was a founding member of the Social Founders Network.

He was also a founding partner of Dining with a Difference, which aims to challenge and change the way chief executives, boards and directors of private and public organisations address disability as a strategic business issue.

With grown-up children and as a happy grandfather, James lived in Guernsey, where he was a trustee of the Guernsey Community Foundation.

He was honoured by HM The Queen in 2002 with the Order of the British Empire for services to disabled people, appointed an honorary fellow of the Royal College of Surgeons of Edinburgh in 2005 and has honorary doctorates from both of the universities in Bristol, his birthplace. In March 2010, he won the Third Sector award for most-admired charity chief executive, and in October 2010 he won the Beacon Prize for leadership.

Read a personal tribute from David Clayton, Chair of Trustees, following the passing of his friend and founder of Changing Faces, Dr James Partridge OBE.

We couldn’t do what we do without our team – and most of all our ambassadors and campaigners who represent the visible difference community.