I’m Atholl, I’m 28 years old, and I’m a Changing Faces campaigner. I’m also a big user of social media and have a growing following on TikTok, where I share my thoughts and experiences on everything from fashion and music, to living life with a visible difference.

I have cystic hygroma – a condition that causes cysts to form where you have lymph nodes. For me, it effects my head, ear, jaw and neck on my left side. I also have facial palsy which is permanent paralysis on the left side of my face caused by surgery when I was a baby.

It wasn’t until I was about seven that I realised I looked different. A nasty comment from a boy in my class awakened my understanding that other people viewed me differently. He told me I was ‘weird’ and ‘ugly’ and then he laughed at me. From that moment I noticed the people staring in the street, and I heard the comments from strangers.

Staring in particular is an experience I know lots of people with a visible difference have to deal with. I can remember being out with my family when I was younger. A woman was staring at me, so my sisters stepped in front of me, to block her view. She just moved and craned her neck to continue looking at me, oblivious to the impact of her actions. The stares and comments really affected me, they stayed with me in my mind.

When you’re on the receiving end of a stare, it can make you feel incredibly anxious. Is this going to escalate to verbal or physical abuse because of the way I look? I’m left wondering what the person is thinking when they’re looking at me. That stare, that they might not ever think of again, could be played over and over in my mind -hours, days, even months later.

I went from being an outgoing child to a teenager who hid away, even avoiding family days out. 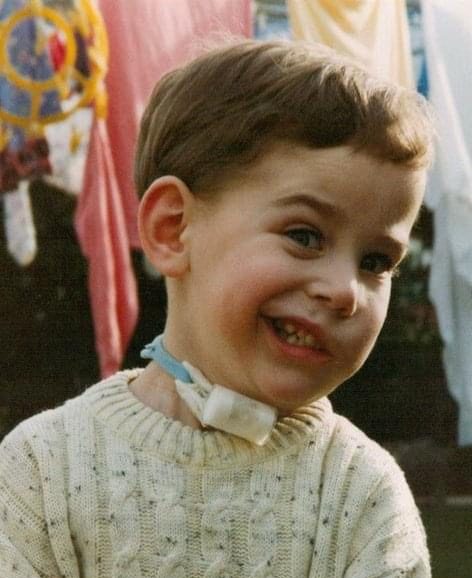 I let ideas about how men should look consume me to the point where I had virtually no confidence left. I didn’t have the perfect body or the perfect symmetrical face. I was never the one that anyone liked in a romantic way.

In part, this was because not only was I dealing with having a visible difference, but I was also secretly trying to deal with the fact that I was gay. This weighed me down and made me believe that because of some ideologies in the gay community – such as looking good, having a great body – that I would never be accepted or find love. It also made me think that if my loved ones found out, they’d be disappointed.

When I was twenty, I remember getting on a packed train to get home after a day at university. Whilst on the train a group of men, around about my age, made comments about my face and the way I look. They said that I looked like a freak, asked me why I was storing food in my face and said that I had a face only a mother could love. I froze and felt unable to speak as I was outnumbered. So, I sat and said nothing like everyone else on the train.

I went home that evening and cried. But it was in this moment I decided I was no longer going to be defined by the things other people said. I was so sick of being so down about myself all the time. I was sick of worrying about leaving the house in case someone stared or said something and I was tired of not having any control. I decided enough was enough and that I needed to make a stand. I needed to own my disfigurement and not let it define who I was.

From then on, I slowly but surely built on my confidence by focusing on who I was inside and not on what others thought of me. I found that there was the potential for me to love myself when I stopped listening to what other people said about me. I found me again, that person I had lost so long ago. The guy who didn’t care what other people thought and who lived his life. It was such a relief.

I started a YouTube channel and found that a lot of people did not judge me because of the way I look. Then during lockdown, I started posting more regularly on TikTok and my followers grew and grew! My videos show off all aspects of my personality from reactions to music, my thoughts and opinions on certain subjects to me interacting with my friends, but I also have videos about my disfigurement and how I became confident. I wanted to show that there was more to me than a disfigurement but also try and help others that were in a similar place to me.

I came out to my friends and family. I left behind toxic people in my life who were awful for my self-esteem. I didn’t like who I became when I was around them especially as negativity breads more negativity.

As I did this, I felt the massive weight lift off of my shoulders and it made me accept myself even more and helped me become even more confident. I had nothing to hide. I was so much happier in life and within myself.

I was able to finally embrace my disfigurement, something I hadn’t done my entire life. I posted photos where I didn’t hide my disfigurement as much and I talked about it on social media posts, being honest about how it made me feel. Which in turn helped me realise I wasn’t alone. Being open also helped me to realise that I was not defined by my disfigurement.

My confidence in how I look and feel about myself has gone from strength to strength, but it has also helped me to help others embrace the way they look through my videos on TikTok. I often receive messages thanking me for the work I’m doing, and for that, I am forever grateful.

Supporting Changing Faces as a volunteer campaigner has introduced me to some amazing individuals too and allowed me to have my voice heard in ways it wasn’t before. All my life I’ve not known anyone else with a visible difference. Yet through the campaigners programme I’ve met other people who share similar experiences to me and it’s helped me to feel valid.

Being part of the Stop The Stare campaign means a lot to me. It’s so important that people realise that behaviours, like staring, can have a harmful impact on someone with a visible difference. I was taught as a child that staring is rude. There’s a difference between someone noticing you and a stare. If we all embraced and celebrated difference a bit more, I think that would help prevent negative behaviours like staring. I’m proud to share my story. I hope it might help a young person feel less alone, and know they can live the life they want.

Face Equality Week is an annual event to raise awareness about the prejudice experienced by people with visible differences. In 2022 it was 16-20 May.

It’s Face Equality week, and we’re calling for the public to better understand the impact of negative behaviours, such as staring, on those who have a visible difference or disfigurement. Today, our campaigners share how staring impacts their lives.