My daughter developed two tiny reds dots on her cheek at around five weeks old. We initially thought she had been bitten by something and took her to the doctor to get checked. A few doctors thought that she had knocked her cheek but when the marks started to grow bigger and a bruise developed around the two red dots we decided to get a second opinion.

We were referred to our local children’s hospital and were told that she had strawberry nevus. The red marks and bruising continued to grow and a lump beneath the birthmark had formed causing the side of her face to stick out slightly. Other than getting very hot and us having to watch she doesn’t scratch it, the birthmark does not cause her any harm. We were told that the birthmark will eventually disappear but is likely to stay with her until the age of around 10. 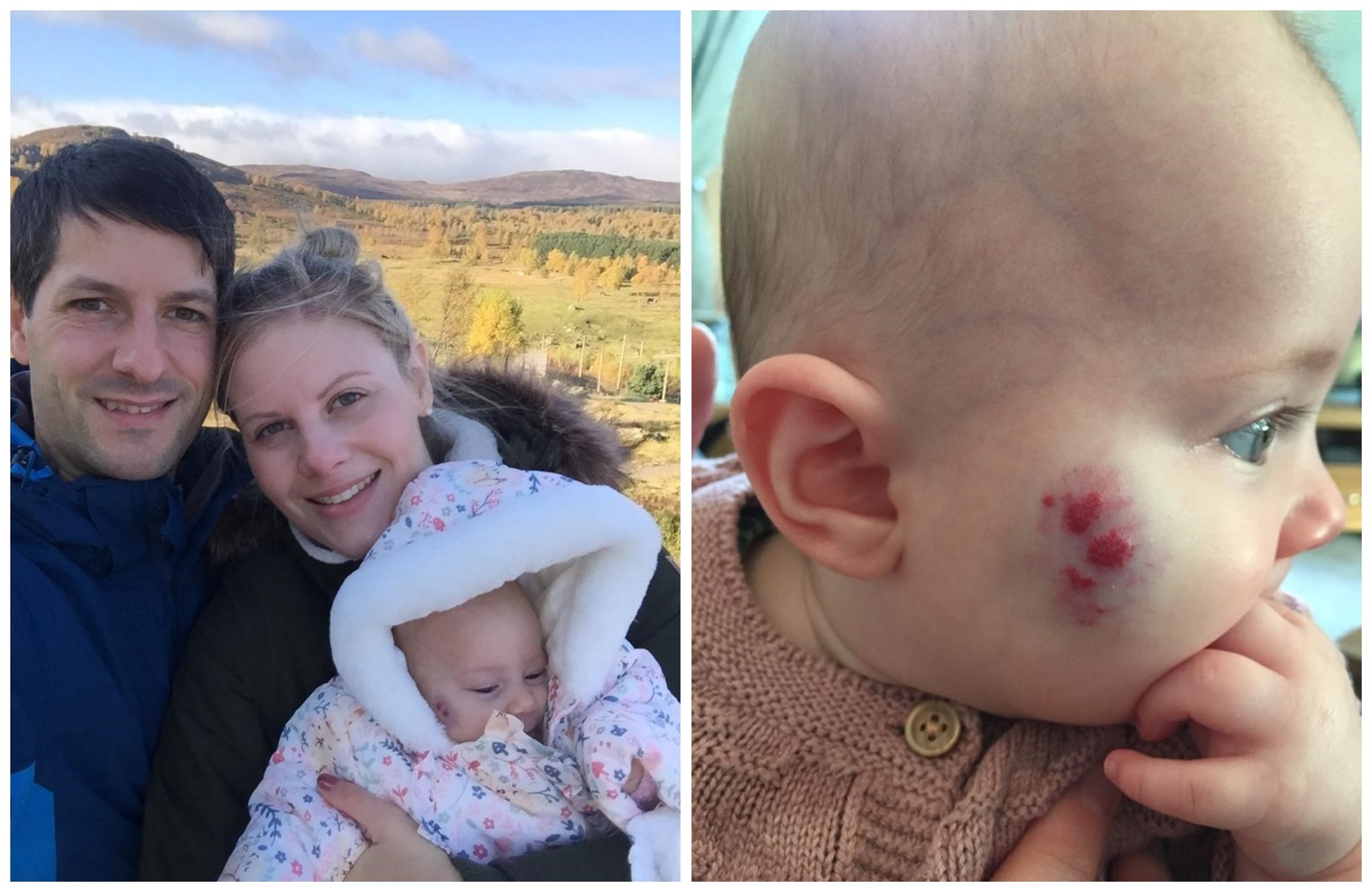 Rachel, her husband and her baby daughter Freya.

After receiving reassurance from the specialist that her birthmark was not impacting any of the muscles in her face or her eyesight we decided to decline starting any treatment. Since our initial referral to the hospital Freya has however received a lot of negative comments from strangers. I was naïve to think that people perhaps wouldn’t pass judgement on her birthmark as she’s just a baby and surely people are more accepting of differences these days.

The comments, however, haven’t seemed to stop, and my husband and I are wondering whether treatment would perhaps shield her from such cruel comments?

We have been met with lots of stares, and don’t mind when people are genuinely intrigued by it and want to find out what it is. We haven’t appreciated such comments as: “Have you dropped your baby?”, “It looks like you’ve burnt your baby with a cigarette.”, “Did your baby fall out of her seat?”, and “Did you bash her face with your car door?”. These are just some of the comments that we have received despite her only being six months old.

As a teacher I strive to educate the children I teach about differences and why the world is a far more interesting place due to the things that make us all unique. In my experience, when children are educated about such differences, they generally grow up to be kind, accepting and understanding individuals. I tell my daughter that she’s beautiful every single day in the hope that she grows into a strong, confident woman who is proud of her birthmark and who can deal with any negative stigma that may come her way.

This, however, doesn’t excuse the fact that in today’s society we still have adults who think it’s acceptable to pass judgement on the way an individual looks in such a way that causes that person upset or shame. I believe that raising awareness of such differences can only help to mould a more educated and therefore more understanding world for our children to live in.

Nina talks about how she's raising daughter Millie – who has a lymphatic malformation – to be strong and confident in her own skin.

We explore some of the feelings you may experience if you have a baby with a visible difference and the questions that it might bring up.