My name’s Caitlin, and I was born with a birthmark on my face, known as a port wine stain.

I first became aware of my birthmark when I started school, at the age of four years old. Before then, I believed that “I was kissed by fairies in my mummy’s belly.” I always felt special telling this story. It provided me with that extra bit of confidence.

As we all know, children can be very cruel and at school, my beliefs of being kissed by a fairy soon came crashing down. This is when I realised I was different and where the days hidden behind my fringe began. I grew up being ashamed of my birthmark, wishing that I could ignore what people would say. I questioned what I had done to be different and wondered if it was my fault.

Growing up, I didn’t have any role models with birthmarks, so I felt completely alone. I also felt helpless and all I wanted to do was scream about how much I wished I wasn’t different.

I was told by a classmate in secondary school that I would amount to nothing, and my face made me unemployable. But, being the stubborn person I am, I decided that I would not let my birthmark and the words of others stifle me. Later in life, these negative experiences became the reasons I began to use my birthmark as a source of strength and take a stand against society’s expectations that we must fit into unrealistic beauty standards.

In 2020 I joined some birthmark groups on Facebook, and followed people who raise awareness about their visible difference. Before then, I didn’t know what my purpose in life was. Finding this community made me realise that I wasn’t alone. I admired and absorbed so much confidence this community had in themselves and each other. I now use this confidence in my life every day.

I soon saw that I could be a part of this community by using my birthmark – my biggest insecurity – to be the inspiration and representation that somebody with a visible difference needed. To encourage confidence and raise awareness is now my biggest passion. Together, we’re one step further in this amazing journey!

I raise awareness in a variety of ways. I make informative tiktoks and other social media posts. I also talk about my visible difference when I get the chance, and in doing so I educate people in day-to-day life like colleagues and the general public. I am also a global vascular birthmark ambassador for the vascular birthmark foundation.

I like to educate people by explaining what my difference is. I explain to them how I was born with it and how it doesn’t hurt or effect my day-to-day life. I explain that it’s a capillary malformation and will never disappear. I also explain that there are many types of birthmarks – all amazing and unique. 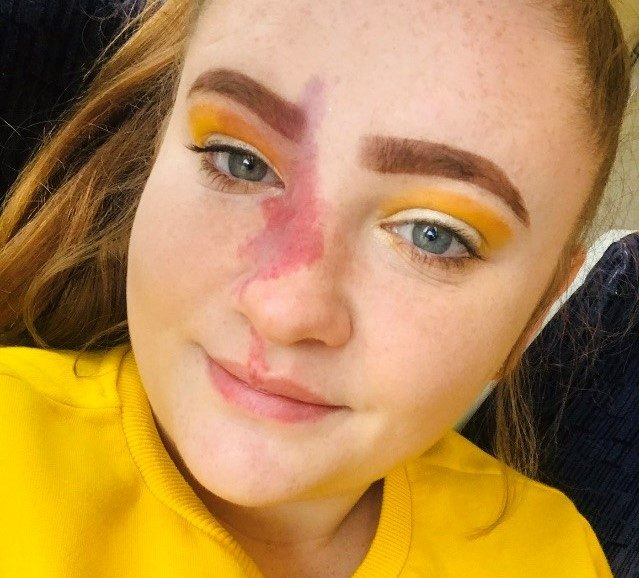 If I happen to notice a curious child staring, I ask if I can tell them a little story of how I was kissed by a fairy in my mummy’s belly. Instead of their parents telling them off and turning the experience into an uncomfortable situation, I’d prefer that children learn about birthmarks and visible difference in a way they understand. If children are taught about differences, there will be less bullying and alienation towards children and adults with a visible difference.

It would be fantastic if more teachers were trained about visible differences and birthmarks, so they know how to deal with situations of bullying and could teach other children what visible difference is and how we’re all different and deserving of kindness. Changing Faces have great teaching resources that do just this!

When I was being bullied in school, I felt like my experiences weren’t being taken seriously, and that the school brushed it under the carpet. It was unfortunate that the bully was having issues at home, and so was taking it out on me, but it created an abundance of confidence issues for me in the future.

I know that Changing Faces work hard to support initiatives in local areas, through their Pledge to be Seen campaign, which encourages brands and corporations to use people with visible differences in their marketing and campaigns. It was great to see Welsh Government sign the pledge, something I hope my own community will one day do.

I would also say that more people with facial differences should be cast in television shows and movies, predominantly children’s films. I know if I had seen a red headed Disney Princess with a Portwine stain I’d have felt amazing. Having characters with different looks and abilities would create a much more inclusive world for all.

I’d like to end my piece by saying that it’s important for people with a visible difference to have a role model. Mine are the global ambassadors for the Vascular Birthmark Foundation. If I hadn’t found them, I wouldn’t be the person I am today. I wouldn’t be birthmark-confident and I certainly wouldn’t be raising awareness myself. The vascular birthmark and visible difference ambassadors who support charities like Changing Faces and the Vascular Birthmark Foundation really are a blessing. They give you hours and hours of their time to raise awareness and strive for a world where we can live without prejudice. Let’s celebrate them!

It’s Face Equality week, and we’re calling for the public to better understand the impact of negative behaviours, such as staring, on those who have a visible difference or disfigurement. Today, our campaigners share how staring impacts their lives.