The birthmark I have changes the pigment of my skin, so it darkens and thickens my right eyebrow, eye rim and eyelashes. It also darkens the skin below my right eyelid.

I’m naturally a people person and loved making friends in primary school. I remember being very chatty and outgoing. It wasn’t until I was about seven or eight that I really started to notice there was a difference between me and others around me. I remember a boy in class calling me names and strangers sometimes stared and asked my mum if I had a black eye.

When I was eight, my family and I decided that I’d get an operation to remove part of the birthmark on my eyelid. A skin graft was done, and half of the birthmark was removed. It was the right decision for me. Even though I hadn’t struggled too much up until then, my mum knew how tough the approaching teenage years could be.

With more self-awareness, so too came more self-consciousness and internal criticism. I found the start of secondary school really challenging, so I tried to quieten myself in lots of ways to ensure nobody would pick on me. 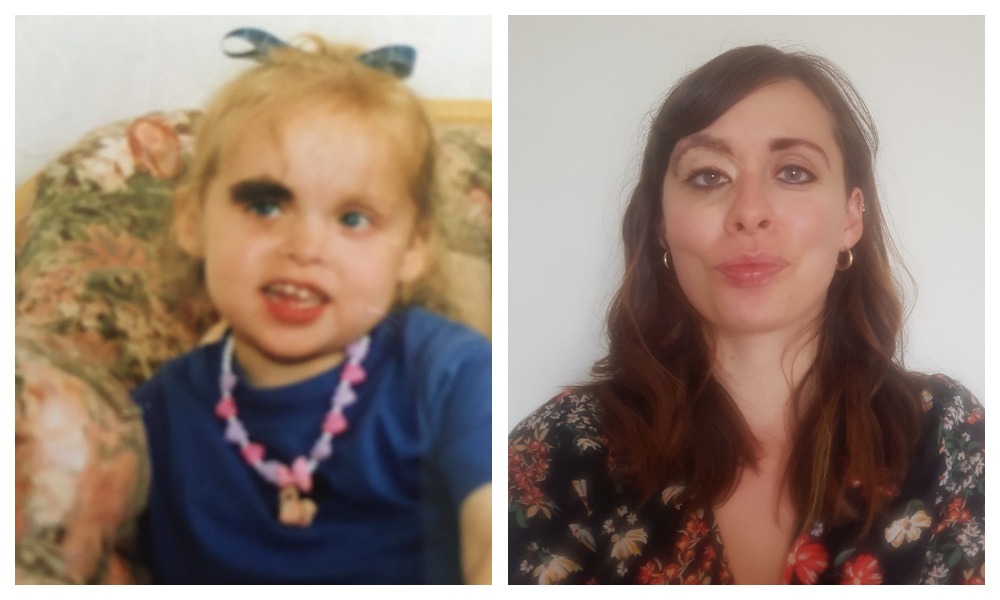 Rachel has a congenital nevus birthmark around her right eye.

I would hide behind people and not look them in the eye, hoping that they wouldn’t notice my birthmark. It was a far cry from the outgoing happy child I’d been. My teenager years were plagued with a strong dislike for my appearance and an acceptance that nobody could ever find me attractive.

As I gradually came out of my shell in the later stages of high school, I started to recognise that people were not judging me for the mark on my face. They were curious about who I was a person and what I had to say. This continued to be the case as I moved to university and found people who really understood me.

Adult life has not been without moments of self-doubt. I’ve heard comments like “you could be the prettiest in the room IF…” or “You’re still attractive even with your birthmark”. Although intended as compliments, they highlighted the feeling that I had making up to do to be on par with my peers. It has taken time to embrace my imperfections fully and, honestly, I’m still working on that.

Meeting the world with an attitude of acceptance and positivity can only be achieved when you have done this work internally. I’ve travelled, lived in different countries and made many wonderful friends along the way. I have a strong supportive family, who have always told me I was beautiful, a wonderful partner, and a sense of self that exists way beyond what’s visible externally.

Meditation and yoga have also brought me towards a sense of contentment and peace in many areas of life, including with my appearance. We are so much more than how we look and having a visible difference just teaches you this lesson sooner.

Self-esteem issues do still exist, and I feel at my most vulnerable when my birthmark is on show to strangers. My goal for the future is to feel beautiful without any make-up or fringe to hide behind, and to find true peace with myself and my insecurities.

If there is something defining about living with a visible difference, it would be the powerful sense of empathy for those around you. You don’t judge people because you know what that feels like. We can never fully understand the internal struggles or individual battles people are fighting, so I urge you to look beyond the surface.

Nina talks about how she's raising daughter Millie – who has a lymphatic malformation – to be strong and confident in her own skin.

Changing Faces campaigner Shannon shares what it took to embrace her birthmark and how social media has been helpful.