When I was seven, I was involved in a road traffic accident. It left me with multiple fractures on the right side of my body and nerve damage in my face. I had to have facial reconstruction, and as a result, I have scarring on my face, head and across my body.

Although I’ve had scarring for most of my life, I can count on one hand how many photographs show it. I’ve always tried to hide it. I wasn’t the only one, either. People would ask if I wanted my scar edited out of pictures. If they didn’t ask first, they thought they were doing me a favour. I often heard: “I’ve edited your scar out the picture for you,” as if my scar was stopping the photo from being good. Or from me being the best, most “instagrammable” version of myself.

I’ve been told that my scar is “ugly”, asked if “I’m ashamed of it.” I’ve been told “I would hate myself if I had that awful mark on my face.” These experiences led me to believe that it wasn’t “normal” to look the way I look. To add to this, I never saw characters or people in the media who looked like me. It would’ve helped my self-esteem if I had seen more positive role models and characters with scarring, and made me more confident to embrace my look. Instead, I hid it in pictures for years.

Daniel has hidden his scar in pictures since he was seven years old.

I grew up playing tennis at an international level, fortunate enough to represent my country and join a Division One American university. Having a visible difference as a professional tennis player was tough. As an athlete, you’re taught to block out negativity, focus on yourself and show no weakness. But in competitions, I felt bullied and distraught.

Opponents and fans of opponents used my scarring to try and get in my head. Taunts like “scarface”, and threats like “I’ll give you another scar to match…” were routine. Sometimes it got so overwhelming that I wanted to walk off court.

My family has always supported me, and I made good friends in the tennis circle. These friends understood the challenges I faced. They had my back, and their positivity and hard work ethic inspired me to stay focused.

I had teammates and friends from across the world, from different races, religions, and sexual orientations. We all spoke different languages, but our values and respect for each other were the same. We embraced and celebrated our differences.

Having a diverse group of friends makes you understand others’ lived experiences and makes you grow and become a better, more compassionate human being. 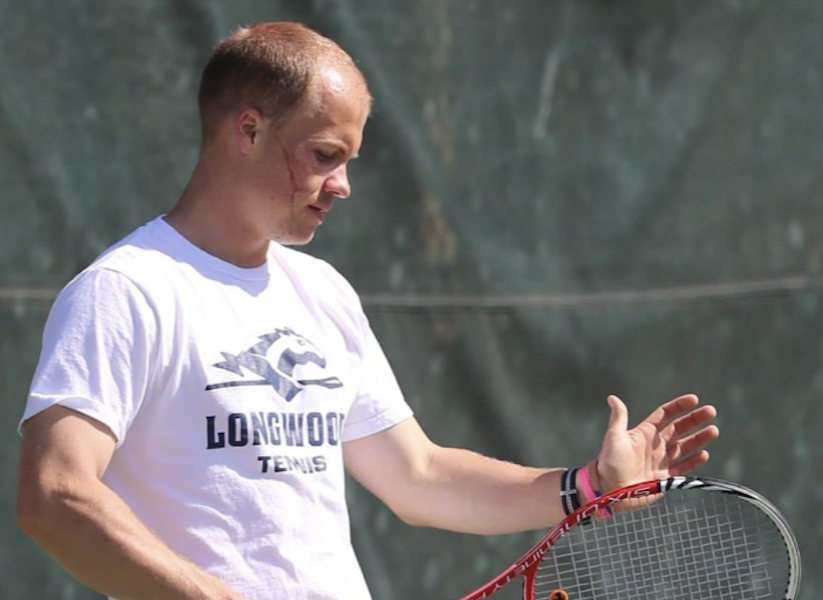 Daniel was taunted on court because of his visible difference, from fans of opponents.

After college, I started to apply for jobs. At a networking event, I was told that I didn’t have an employable appearance. Apparently, “my face is a distraction.” I never understood this comment, but it was devastating to hear in my early twenties. Before hearing these comments, I was excited about my future – it was laid out like a blank page in front of me. But receiving comments before I’d even started applying for jobs was a huge knock to my confidence. I questioned if most employers or recruiters would feel the same. It made me wonder whether I would ever get employed. In fact, it’s an insecurity I still have today for in-person interviews.

During interviews, I noticed the people interviewing me constantly staring at my scar, distracted by it, not listening to what I had to say. There was no eye contact or engaged listening. In my head I knew that what I said didn’t matter, their decision was made.

I still need to work on my anxieties over applying for jobs and in-person interviews. I’m trying to find confidence and be comfortable with showing my difference in a work environment. Unfortunately, there are a lot of judgemental people out there still.

I have grown to become proud of my visible difference. I have overcome challenges that some people will never have to worry about. This includes battling my own demons – my anxieties and insecurities about looking different, and of course, the challenges of other people’s reactions, comments and discriminatory behaviour because of the way I look.

I’ve been told that my scar is ‘ugly’, asked if ‘I’m ashamed of it’. I’ve been told ‘I would hate myself if I had that awful mark on my face”. These experiences led me to believe that it wasn’t ‘normal’ to look the way I look.

There are many times I wish I didn’t have a scar on my face, or my facial hair grew properly, but I now joke that it makes picking my good side in a photo easy! My experience of living with a visible difference has made me realise that education is key. We need more representation and discussions around visible difference, and it’s great to see charities like Changing Faces celebrating the visible difference community.

In the years gone by, I’ve learnt that derogatory remarks and staring reflects the mentality of others. Your self-worth is dependent on your mindset and it’s up to you how you let things affect you. On the other hand, I’ve learnt that not everyone is out there to be rude; some people are genuinely curious – they display empathy and are interested in your story.

Today, I’m grateful that my strength and perseverance has pushed me through tough times and I’m leading a great life, despite the prophecies of other people. I head back to the USA in the next few months and will be getting married. I’m excited about settling down.

To everyone who has a visible difference: be confident and own who you are. One way we can help our community is by being open to educating others and help them understand that even if we look different, in reality, we’re the same as everyone else.

You can take steps to build confidence to work with visible difference while gaining useful skills and experience and improving your existing abilities.