Where did the idea for ‘Face It – Leonie‘ come from and how did the script develop?

Miranda: My own visible difference was acquired in my twenties, so I have experience of losing one face and gaining another. It was a journey of acceptance and I vividly remember times when I thought I had emotionally conquered it completely, then I’d suddenly be blindsided.

I even remember feeling that way the first time I saw myself being interviewed on TV, years later. I was used to seeing myself in the mirror and smiling in photos, but I hadn’t seen how my changed face moved when I talked, and I was taken aback. Fortunately, those feelings were very short lived, but the awareness that I wasn’t entirely emotionally secure about my face after all would linger.

I’ve become increasingly interested in how everyone feels about their face and how that might change over time. Especially in our modern swipe-right world, where even our phones use facial recognition. Ageing is the most universal example, and many women say they begin to feel overlooked in their fifties.

When I had an opportunity to pitch to the BBC, the idea to create Face It – two monologues, one exploring Leonie’s life and one exploring 50-something Abbey’s – was born. I approached fantastic producer Michaela Hennessy-Vass, who is also disabled, and we developed the idea together as I wrote various drafts. 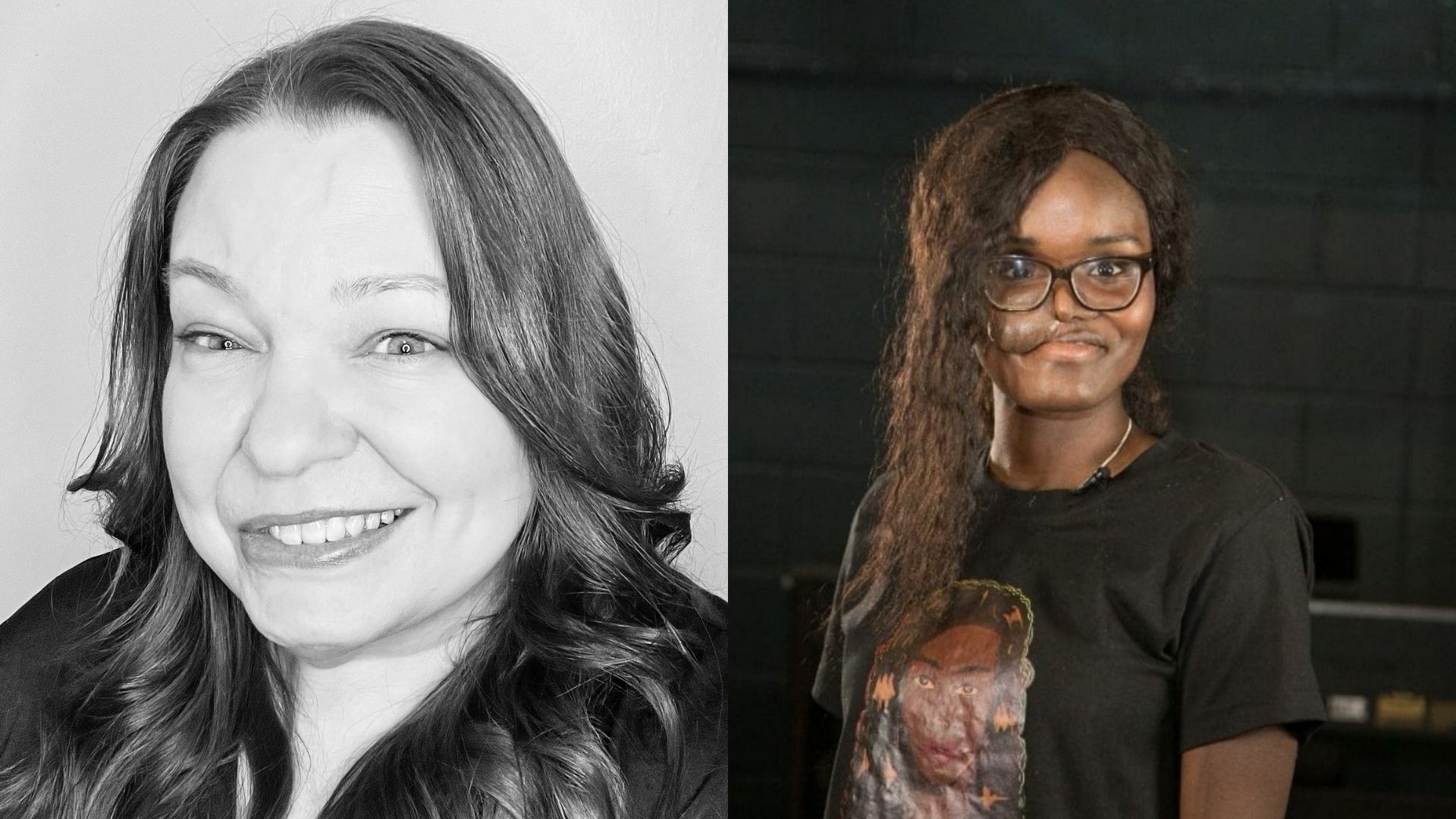 The character of Leonie came pretty much right away though. I instantly knew her and could hear her voice from the start. Leonie’s story isn’t my own and she isn’t me, but I drew on my lived experience. All of the well-meaning comments in the opening sequence have been said to me in one way or another. When that happens it’s in my nature to find the humour in the gap between people’s intentions and the reality of how they come across. Leonie does the same and is aware those comments say nothing about her but reveal plenty about the person saying them.

There are few TV shows or films which have been written by and star people with visible differences. Why is it so important that we see more positive representation of people who look different both in front of and behind the camera?

Crystal: It is essential to see more representation of visible differences because every human life should be seen on screen. We have stories to tell and deserve the same privilege to share love, pain, joy and liberation as any other story out there today.

It has been too long that characters with a visible difference have been written using a pity or villainous narrative that has affected how people view others who look different in modern-day society. It is not to say that performers with visible differences should not play the villain, but they should also have the opportunity to play characters that reflect the diversity of the visible difference community.

Miranda: I’m glad to see any positive representation of people with visible differences onscreen. By ‘positive’ I mean avoiding tired tropes, like the villain having scars. But that doesn’t mean characters should be ‘inspirational.’ I want them to be well-rounded, with flaws like any other character, and most of all, I want their stories to be authentic.

The only way to absolutely achieve that is to have people with lived experience creating the narratives, which is extremely rare. TV writers’ rooms desperately need more diverse voices. I’ve written extensively for the stage, and I also write for children’s TV. I would love to do the same in mainstream TV and to have my own shows commissioned.

I also want to see actors like Crystal cast in a range of roles, not just ones about visible difference or disability, and I want to write a range of stories and characters. We know that who we are as people shapes our perception of the world, so Crystal and I will bring something different to the table and truly represent our communities, whatever story we are telling. Our TV and film audiences are diverse and should be reflected. It matters. We shouldn’t be missing in action.

The character of Leonie often uses humour to deal with some of the challenges and comments she’s countered. How did you relate to Leonie’s experiences? And what was it like to play this role?

Crystal: I had never played a role where I resonated with a character so strongly. The scene where Leonie described the feeling of wearing a mask during the pandemic brought up memories of how wearing a mask became my security blanket. It reminded me of the person I was before my operation and how invisible I was, and how people treated me differently without caution.

Leonie’s sudden realisation mirrored my own experience, and I became more connected with a character than I had ever been before. I have a strong belief that others within the visible difference community may feel the same.

Miranda had done a fantastic job writing Leonie as a charismatic character with an underlying sense of vulnerability that I am sure most people can resonate with. 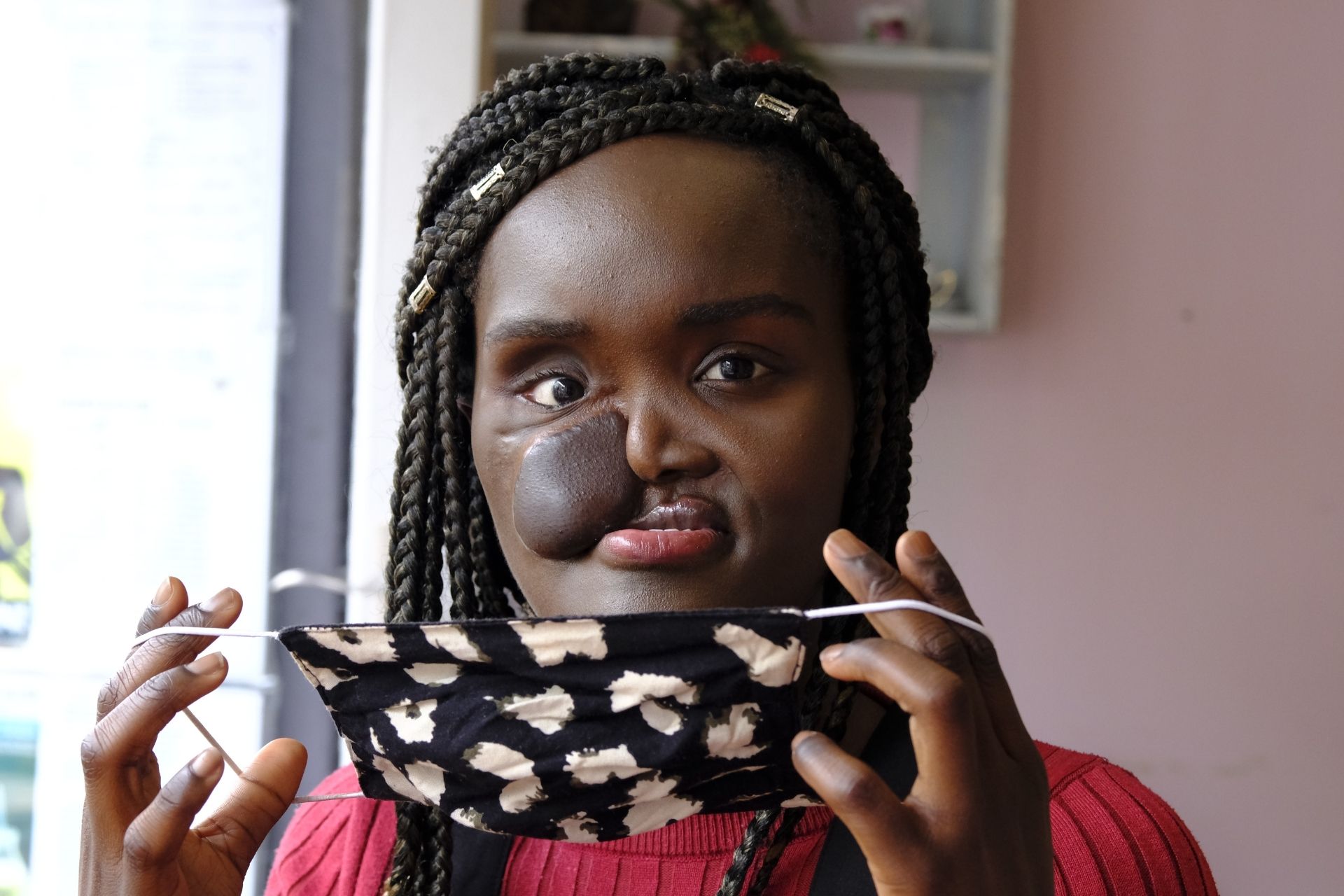 Tell us about the rehearsal process and the day of filming. How did you find the experience?

Miranda: Due to Covid restrictions, we rehearsed beforehand over Zoom, which worked well for a monologue. Crystal rehearsed with myself, our producer Michaela Hennessy-Vass and our director Jason Edwards. As always, rehearsals were a chance to get both the script and the performance working smoothly together.

I didn’t know who would play Leonie when I wrote the script, but now I could tailor the script for Crystal, both in terms of references to Leonie’s visible difference (even though this is intentionally kept relatively vague), and in terms of changing some words or phrases so they’d feel natural and accessible for our actor.

The budget required filming all in one day which was a tall order… but Crystal was more than up to the challenge and everyone’s excitement for the project certainly helped. It’s fantastic for a writer to see it all come to life before your eyes. I also loved being involved in the editing process alongside Michaela and Jason.

Crystal: I finished my acting foundation year at LAMDA drama school and was excited to start working on ‘Face It – Leonie’. At first, I was nervous as I had many lines to learn in a short amount of time. Thankfully, the script was enjoyable to read, with each line being funnier than the last, making it easier to remember my lines and work on my character.

Both Miranda and Michaela created a safe space for me to try different ways of portraying Leonie, so I felt comfortable developing the character with them. The director, Jason Edwards, came afterwards, and his calm and patient nature put me at ease through the online zoom rehearsals.

I found the filming day an exhausting but gratifying experience as the crew made me feel looked after, and Miranda and Michaela treated me equally with care. Doing a monologue to the camera all day was not easy. Still, the compassionate way that Jason worked with me helped hugely and the thought of doing such an impactful film kept me going. In the end, I appreciated every second.

Reflecting on this project, what are you most proud of? And what do you hope viewers take away from watching Leonie?

Crystal: I am so proud that a film like ‘Face It – Leonie’ is being put out into the world because the world needs it. It is time for the world to see truthful and authentic characters like Leonie.

I hope that the viewers not only become more mindful when speaking or reacting to a person with a visible difference, but they feel more inspired to advocate for more stories, like Leonie’s, in TV, media and books to create change.

The time for representation for those who have a visible difference is now. ‘There is nothing about us without us’, and I genuinely believe the more we tell stories like this, the more it will cause an impactful reaction.

Miranda: I’m really pleased that we found the right balance between comedy and drama because it’s a fine line and it’s challenging for a writer to move smoothly between the two. I wanted to do the character’s humour justice without losing the rawness of the drama.

I’m proud that this story increases the representation of people with a visible difference both on and off screen, and that Michaela and I working together meant that the creative team was led by two disabled women. And I’m hugely proud that we were able to give Crystal her first break and show everyone how talented she is.

I hope viewers will take away a new understanding of how visible difference can be experienced, including interactions with others, however well-intentioned they may be. And as a comedy drama writer, I hope there are moments that both touch viewers and make them laugh.

You can watch Face It – Leonie on BBC iPlayer.