When April was a baby, we noticed that she had different coloured eyes. Taking her to the doctors, to check her eyesight was ok, we soon found out that she had two rare conditions. The first, tuberous sclerosis, is a genetic condition that was causing benign tumours to develop on April’s heart, brain and face. The second condition, fibrous dysplasia, is an uncommon bone disorder where scar-like tissue develops in place of normal bone, causing the bone to become misshapen. This is what causes April to have a visible difference.

April is a confident and outgoing six-year-old. She shines. She’s sociable and loves swimming, and dances at her local Diversity dance theatre – where she’s made lots of friends.

In the past, I’ve found it difficult to cope with the attention April’s visible difference receives. When I walk around the shops and I see my beautiful girl get stared at, I get upset. I’m protective of her feelings and at first, I didn’t know how to deal with my emotions. I felt so angry at people who stared. What’s worse, I felt like I was letting her down as her mum by not confronting people when they did stare. This would often make me cry.

Once, when we were on holiday, and walking down the street, I noticed a man standing outside his shop, staring at us. He marched straight up to me and asked: “what’s wrong with her face?”

It stunned me. Although I’d experienced situations like this before, it was a bit of a turning point – I realised that it was me who got upset, and not April. And it was me who needed support with handling other people’s reactions – in a way that made me less angry.

I got in touch with Changing Faces after a few more days of finding things difficult. For context, I work in the primary school that April goes to. One day, we were walking into school, and I saw a man walking towards us with his little girl. As we got closer, the little girl started to hide behind her dad’s back. She was cowering behind him – looking frightened of April’s face. Getting into work, a wave of devastation washed over me. The school counsellor spoke to me and mentioned Changing Faces.

I gave Changing Faces’ Support and Information Line a ring straight away. I ended up being on the phone for over an hour. They listened to me, calmed me and gave me so much advice.

I gave Changing Faces’ Support and Information line a ring straight away. I ended up being on the phone for over an hour. They listened to me, calmed me and gave me so much advice.

For years, I had taught myself to deal with people’s reactions with anger – getting defensive. Changing Faces completely changed my attitude and approach. Instead of feeling confrontational, they told me to try confronting the person staring with a smile. Most people will smile back and look away – which I’ve since learned is true.

Changing Faces also told me to prepare some responses for when I’m asked upsetting questions. And learn that some people don’t mean to be rude – they’re just curious.

Now, when I see people staring, I can cope better. I do still hold that little bit of anger. I don’t like it when people stare. It’s rude and it does have an impact, and I’d like people to think about that and change their behaviour. But for me, now, it’s better to think that they’re curious. It’s been an important learning curve, particularly because I want April to grow up with confidence and not feel angry. I’ll forever be grateful for that hour-long conversation. 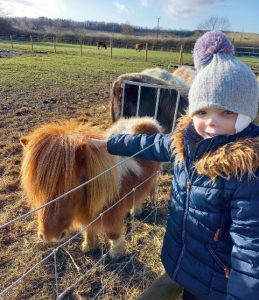 There is so much beauty in April’s difference. For example, half of her hair is blonde, half brunette. Since she was a toddler, we’ve had people asking us if we dye it! April loves her hair – she’s so proud of it. If people ask questions, April shrugs it off, with a “well – that’s just my hair.”

Contrasting her hair, which she’s always accepted, April is starting to feel more self-aware. The other day, I caught April looking in the mirror and touching her eye. Before I could say anything, she’d turned to me and asked “mum, why does one of my eyes look different to the other one?”

In the past, I’ve had help from Changing Faces to deal with my own emotions when it comes to April’s visible difference. But now I’m starting to prepare myself with how I can help April, as she becomes more self-aware, and deals with other people’s reactions.

One way I’m tackling this, is by teaching April that everyone is unique and beautiful in their own way. I’ve started to buy books and toys that reflect difference. I’ve bought Barbies that are bodily diverse, and other dolls reflecting different disabilities and different ethnicities. Glancing around my house now, I see lots of toys and items that celebrate difference and feel proud at our inclusivity.

It also seems to be working. The other day, we were reading “Wonder”, a book about a boy with a visible difference. Out of the blue, April turned to me and said “mum, everyone looks different, but everyone is beautiful.” An April affirmation! I felt so proud.

Together, we’ve already come so far. April hasn’t needed support from Changing Faces yet, but I know that whatever the future holds, we have the support of a wonderful charity, and wonderful community of people with all sorts of visible differences.

If you or a loved one are struggling with the emotional impact of a visible difference, our confidential Support and Information Line is here to help.

Our Young Media Champion, Marcus, shares the impact reading Wonder had on him as he grew up.

Kate's son William was born with the condition Treacher Collins Syndrome. She shares her family's journey and hopes for William's future.