I am 47 years old and I have a very rare skin cancer called Ferguson-Smith syndrome, which causes skin tumours. I had my first tumour when I was eight years old, and they appeared on my ears. I was bullied at school and, as my dad had the same condition, I had to cope with being bullied about my dad’s appearance too.

As I got older, I started to get more and more tumours on my face. They would appear as small spots, but they would grow so big and painful that I would have to have them either cut out or frozen, which has left me with scars all over my face.

My children have known about my condition since they were very young. They always came with me and my wife to my hospital appointments, so they’ve grown up knowing that their dad has to be checked by his skin doctor. 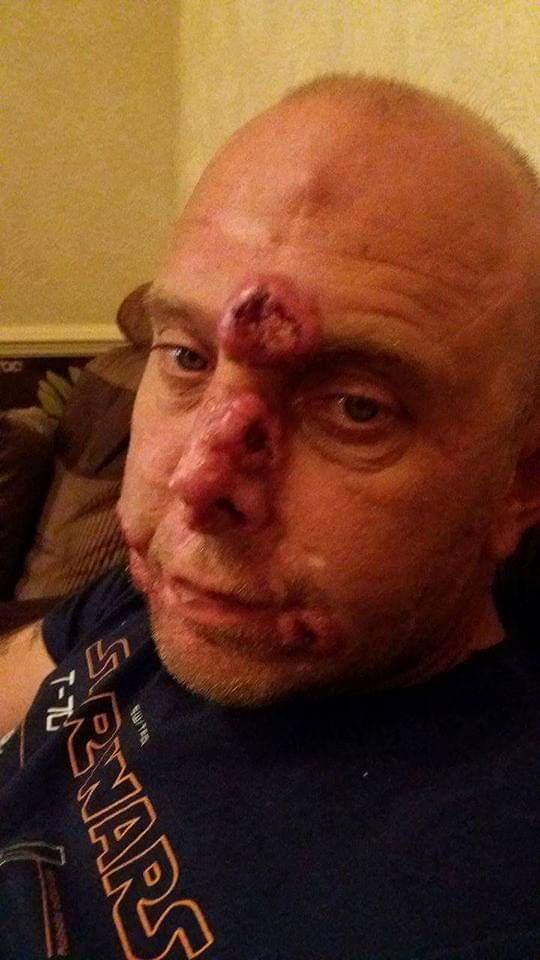 As soon as they were old enough, we explained to them that it is a hereditary condition and that there is a chance that one day they may get a spot, but that there’s also a chance they may never get a spot. We just make sure we protect their skin and that they understand to be careful in the sun.

In 2009, I had to have half of my nose removed. A few years earlier, my dad had to have his whole nose taken off because he had a very big tumour, so I had always feared that I could lose my nose too.

After I had the operation, many people stared at me and said awful things. I even had someone spit at me then chuck money at me and tell me to sort my face out. This has affected my self-confidence – especially when going to places where I don’t know people and they ask me what has happened to my face. This is particularly hard if it’s in front of my two sons because I remember how angry and upset I felt as a child when I saw people staring and being unkind to my dad.

I now deal with negative comments by just ignoring them. If people actually ask me what has happened to my face, then I will explain my condition to them. Usually, people will say sorry for asking or look embarrassed that they said anything to start with.

I took part in the Katie Piper documentary ten years ago to share my story. At the time, I was due to have more operations to remove more of my face. Afterwards, I chose not to have reconstructive surgery because I feel this is me and this is who I am. I also appeared on This Morning with Dr Chris and did a few interviews for our local paper to discuss skin cancers and bring attention to people with visible differences.

I would really like to speak to other people who have this condition, especially now my dad isn’t here anymore as I would always speak to him. He knew how I felt. All I have ever wanted to do is make people aware of how it makes people feel inside when you are stared at or laughed at just because you look different. We are all the same, and I just want to be accepted for me, not the way I look. I want to help others with visible differences to feel accepted too.

If you have a visible difference, you may experience abuse, harassment and even hate crimes. We explain when and how to report this to the police.

Find out about the abuse faced by many people with a visible difference – and explore how you can get involved in our Visible Hate campaign.