Earlier this year we were approached by researchers from the ITV soap, Emmerdale. They wanted to talk to us about a new storyline they were developing, that would see one of their adult characters acquire a visible difference following an accident.

Together with our ambassador, Catrin, we spoke to the Emmerdale creative team, including the actor, Fiona Wade, who plays the character, Priya.

Last week on the show, Priya was involved in a fire, and is now in hospital being treated for the burns she sustained in the accident.

As part of our conversations with the Emmerdale team we connected them with experts in burn injuries. Changing Faces ambassador, Catrin also shared her own story, including details about the accident she was involved in, and the treatment she received. But we spent most of our time talking about living life with a visible difference, focussing on what happens on a day-to-day basis.

Catrin explains: “Meeting the creative team and Fiona was so interesting. It was great to know that they wanted to learn both about the immediate impact of having a burn injury, but also about how my scars and experiences have shaped me and what my visible difference means to me now. 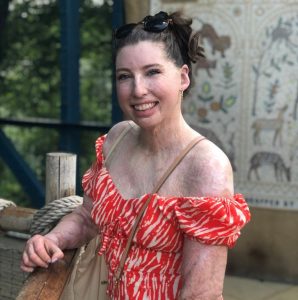 “It’s a soap – we know there’s going to be ‘drama’ around the accident, but I hope the conversations we had with the Emmerdale team help them to craft a storyline that looks beyond the immediate physical, medical impact of an accident. For many of us with visible differences, that’s just one part of the story. So often it’s about dealing with other people’s reactions and responses to visible difference.”

Working with ITV on this storyline is part of our Pledge To Be Seen campaign. We want more positive representation of visible differences to be seen across popular culture. Our recent survey of over 1,000 people with a visible difference with polling company Savanta ComRes found that:

Our deputy chief executive, Catherine Deakin, explains why we decided to work with Emmerdale on this storyline, “One in five adults in the UK self identifies as having a visible difference, but our research found that people just don’t see themselves represented on screen.

“Our ultimate aim is to see characters on TV who happen to have visible differences. A visible difference doesn’t need to be the focus of the story, it can just be part of what makes the hero, the lead role, or someone serving behind the bar in The Woolpack.

“We’re hoping that following our getting involved with Emmerdale, we will see a storyline develop that is sensitive to the fact that living life with a visible difference isn’t always straightforward, but equally, it doesn’t have to be devastating.”

We’re pleased that viewers who might be affected by what they see on Emmerdale and the experience of acquiring a visible difference are being encouraged to find out more about organisations like Changing Faces through ITV’s advice pages, so they can access information and support. We’ll be following Priya’s story and keeping in touch with the Emmerdale team.

Catrin says, “Now Priya has a visible difference, my hope is that at various points in the life of the character, they will come back to Priya’s scars, whether that be showing viewers how she handles further treatment that might be required, or how she deals with anxiety around experiences, like if she wants to go for a swim. If situations like these are explored, it could be a real opportunity to educate viewers about visible differences, the impact of unwanted comments and stares, but also showing someone living the life the want to lead, with a visible difference.”

As the latest Bond film premieres, featuring villains with scarring and disfigurements, we are calling for change in the media and film industry.

Burns survivor Catrin, 25, came to terms with a life-changing accident and is now a Changing Faces ambassador and an Avon model.