An incredibly powerful open letter from two parents about their daughter and her visible difference has been shared by hundreds of thousands of people across the UK and around the globe.

Titled, “To everyone who makes our daughter’s life more difficult than it should be”, the heartfelt letter by parents Liam and Sinead reflects on how their daughter Elizabeth is treated by others because she looks different.

Elizabeth was six months old when she was burnt in a house fire and was left with extensive scarring covering much of her body. 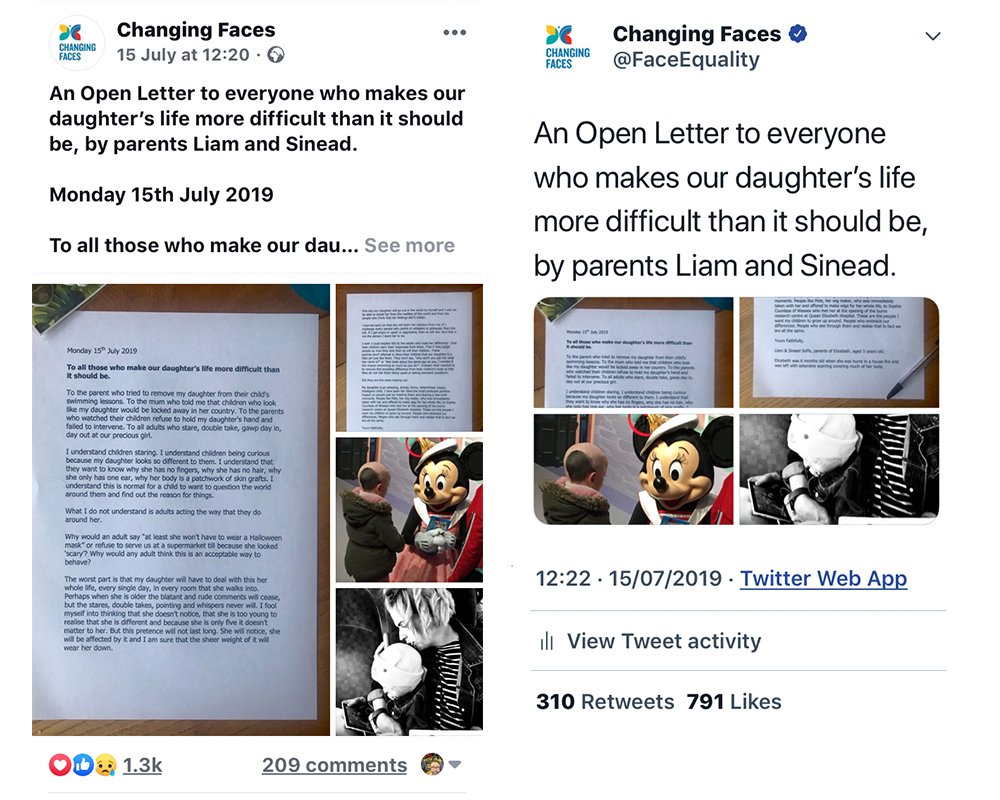 Since 15 July, the open letter has gained worldwide coverage across social media and news outlets, including a live interview with Liam and Sinead on BBC 5Live.

Becky Hewitt, Chief Executive of Changing Faces, says: “All too often we hear from parents who have a child with a visible difference about the stares in the street, the negative comments and how that makes them and their child feel. So, sharing Sinead and Liam’s incredibly powerful letter felt as though we were giving a voice to not just one family but the hundreds of parents who go through this day in, day out.

“The response from across the UK and the world has been amazing and we hope it will make people stop and think the next time they see someone who looks different, that it may prompt a conversation with their children or grandchildren about difference and that people will be more aware of how they behave. We know that if we can get it right for children and young people then it can make a real difference and change lives.” 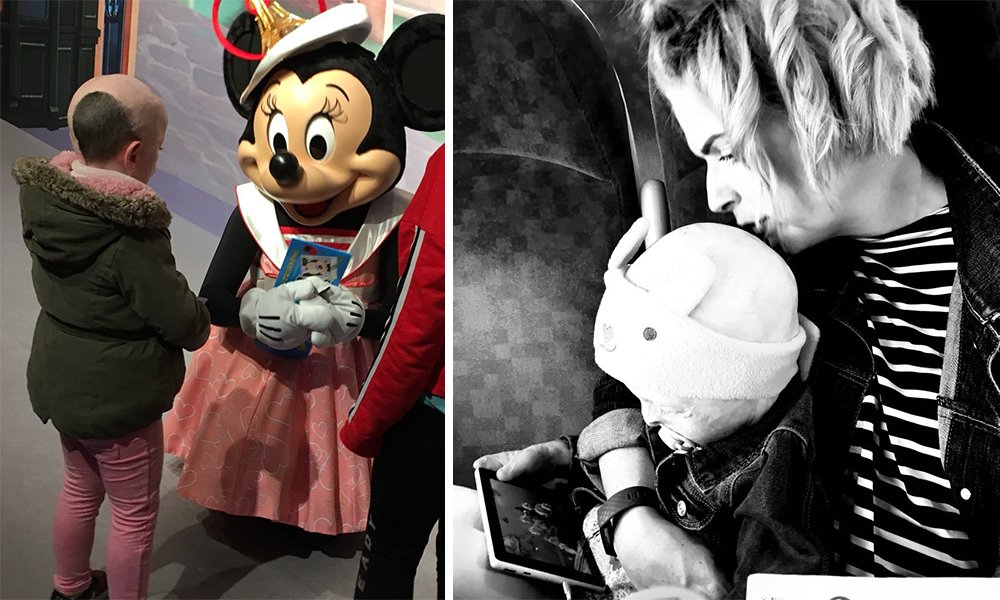 Read the open letter from Liam and Sinead in its entirety:

“To all those who make our daughter’s life more difficult than it should be.

To the parent who tried to remove my daughter from their child’s swimming lessons. To the mum who told me that children who look like my daughter would be locked away in her country. To the parents who watched their children refuse to hold my daughter’s hand and failed to intervene. To all adults who stare, double take, gawp day in, day out at our precious girl.

What I do not understand is adults acting the way that they do around her.

Why would an adult say ‘at least she won’t have to wear a Halloween mask’ or refuse to serve us at a supermarket till because she looked ‘scary’? Why would any adult think this is an acceptable way to behave?

The worst part is that my daughter will have to deal with this her whole life, every single day, in every room that she walks into. Perhaps when she is older the blatant and rude comments will cease, but the stares, double takes, pointing and whispers never will. I fool myself into thinking that she doesn’t notice, that she is too young to realise that she is different and because she is only five it doesn’t matter to her. But this pretence will not last long. She will notice, she will be affected by it and I am sure that the sheer weight of it will wear her down.

One day our daughter will go out in the world by herself and I will not be able to shield her from the realities of the world and from the people who think that her feelings don’t matter.

I learned early on that she will learn her reaction from me. If I challenge every person who points or whispers or grimaces, then she will. If I get angry or upset or aggressive, then so will she. And that is not the person I want her to be.

I wish I could explain this to the adults who treat her differently – that their children learn their responses from them. That if they judge people by how they look then so will their children. These parents don’t attempt to show their children that our daughter is a little girl just like them. They don’t say, ‘why don’t you ask her what her name is?’ or ‘she looks about the same age as you, I wonder if she enjoys swimming as much as you do?’. Instead, their reaction is to remove this troubling difference from their children’s lives so that they do not risk them being upset or asking awkward questions.

But they are the ones missing out.

My daughter is an amazing, strong, funny, determined, happy, intelligent child. I have seen her have the most profound positive impact on people just by meeting them and sharing a few brief moments. People like Pete, her wig maker, who was immediately taken with her and offered to make wigs for her whole life, to Sophie Countess of Wessex who met her at the opening of the burns research centre at Queen Elizabeth Hospital. These are the people I want my children to grow up around. People who embrace our differences. People who see through them and realise that in fact we are all the same.

Find out about the abuse faced by many people with a visible difference – and explore how you can get involved in our Visible Hate campaign.

It can be difficult to receive comments and questions about your child’s appearance. We suggest some different ways you can deal with this.

We explore why people stare, share some things you can do to stop it happening and provide advice to help you and your child cope with unwanted attention.