Independent research agency, CHILDWISE, surveyed over 2,000 children aged 7-16 years old and almost half (46%) said they had a mark, scar or skin condition that made them look different. This is equivalent to more than 3.5 million children and young people throughout the UK self-identifying as having a visible difference. 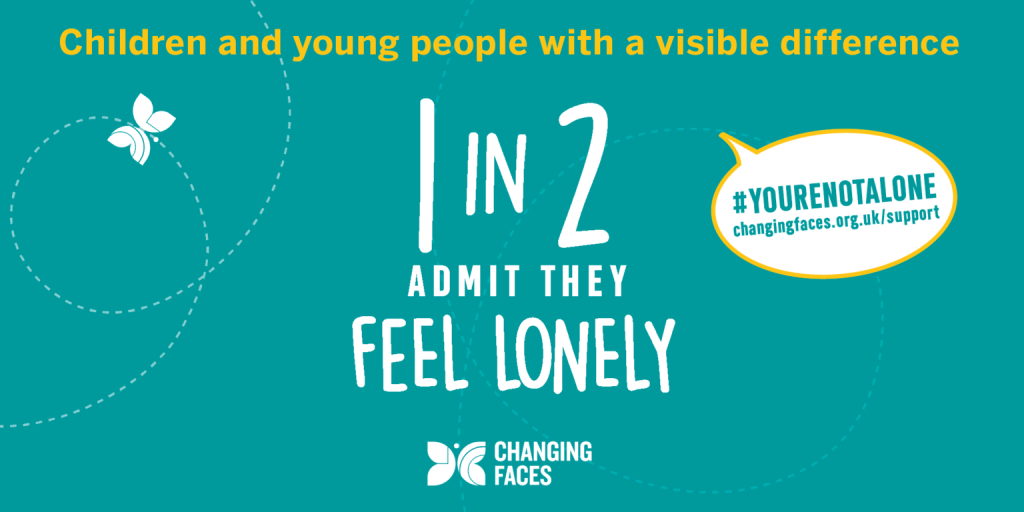 In response to the survey, this Anti-Bullying Week, our young Changing Faces champions and campaigners are calling on parents, teachers and other young people to celebrate difference and be a better ally to anyone experiencing appearance-related bullying.

Becky Hewitt, Chief Executive, Changing Faces says: “Children and young people with visible differences tell us that they feel isolated and excluded, never seeing anyone who looks like them portrayed in a positive way. Far too often visible differences become the focus of bullying.

“This year has been a particularly anxious time. Children receiving support from our specialist mental health and wellbeing team reported fears about returning to school and college post-lockdown, knowing the stares, comments and bullying would start all over again.”

The research also reveals that two-thirds (66%) of children with a visible difference fear they are not good enough. Over half (52%) of children feel the way they look holds them back, compared to just a third (36%) of their peers.

This Anti-Bullying Week has the theme United Against Bullying, and we are calling on children, young people, teachers and parents to change the way they think about visible differences.

Changing Faces young champion, David, who has a skin condition, says: “The first few years of primary school were hard. The other children called me names such as ‘cornflakes, scabby, snowflake and flaky’. One boy would keep picking on me, pointing out the flakes on my jumper in a nasty way. In dance lessons no one would hold my hand.

“I didn’t want to go to school anymore but my teachers sorted it out really quickly. Then everyone understood my condition and wanted to be my friend. People need to understand that their words can hurt. If more young people were encouraged to celebrate difference, then children wouldn’t feel lonely and worried about looking different.”

For other young people the bullying can go on for years. Changing Faces campaigner, Jenny, who was born prematurely with a birth defect known as gastroschisis, and now lives with a scar across her abdomen, no belly button, and several chronic health problems, explains: “For a decade, aged seven to seventeen, I was bullied for my visible difference. I was dragged around the playground by my hair, cornered in bathrooms and had clothing removed without consent. People gawked and whispered and touched. Sometimes I’d receive verbal abuse about it on the bus in the morning; I hadn’t even entered the school grounds yet.

“Being bullied at school impacts your education; a time in life that shapes the adult you might turn into. I’m speaking out because I believe everyone deserves to feel respected. Every environment you’re in should be a safe one. Whether that’s school, work, the changing room or the street. You’re deserving of that.”

We provide the UK’s only counselling and wellbeing service for children experiencing mental health problems because of their appearance. Our service is completely reliant on voluntary funding; and BBC Children in Need supports the service across the North of England.

A recent report by the All Party Parliamentary Group on Skin (APPGS) found that fewer than 5% of dermatology clinics in the UK provide any level of specialist mental health support for children and young people. We also offer a range of support for people experiencing appearance-related bullying, including self-help materials for children, their families and teachers.

People who look different sometimes experience bullying. We share some advice on how to stop this from happening to you.

We cover what bullying is and the practical steps you can take if you think your child is being bullied because of their visible difference.