I was diagnosed with a one-in-a-million rare illness known as Stevens-Johnson syndrome (SJS) and toxic epidermal necrolysis (TENS) back in January 2011.

Stevens-Johnson syndrome (SJS) is a rare, serious disorder of the skin and mucous membranes. It’s usually a reaction to medication that starts with flu-like symptoms, followed by a painful rash that spreads and blisters.

I remember it as if it was yesterday… I was at college one day, and I told my teacher that my eyes were itching. I went home and called the doctor. I was told by my GP to buy some over-the-counter eye drops, and my mom put the eye drops in for me.

Within 30 minutes, blisters started appearing under my feet and over my whole body. Pouring water on myself was excruciatingly painful. I normally have a high threshold for pain, but this was a different kind of pain. It felt like I was burning from the inside out.

The last thing that did it for me was when my air way started closing up, and I was finding it hard to breathe. That’s when my mom called the ambulance. At this point, I was unable to stand on my feet as blisters covered the soles of my feet. My initial thought was that this is just another ordeal and I will overcome it. I was born four months early and weighed just one pound, so I’d faced various medical surgeries and ordeals before and had come through them all.

Never in a million years, did I think all my skin would peel off and I’d end up in an induced coma due to this severe allergic reaction known as SJS.

I was in hospital from January to March. Initially, the medical team thought I had swine flu and put me in isolation. I was throwing up thick blood and blood was gushing out my eyes due to the allergic reaction I didn’t know I was having at the time.

Later, I was moved to The Royal London Hospital, thanks to one of my doctors who was aware of what was happening to me. They put me in an induced coma due to the severe nature of the condition.

Recovering from SJS has been an ongoing process. Having to use eye drops for the rest of my life to keep my eyes lubricated is crucial. I am so blessed that when I came out of the ordeal, I did not need to have a skin graft done or eye surgeries. My skin has healed pretty well. From time to time I do get blurry vision. On the bright side, I have new skin, fingernails, toenails, and hair like a baby!

I remember not wanting to go out in public initially as I feared how people would perceive me. I would hide myself behind sunglasses and always wear a scarf to cover the hole in my neck. I felt insecure in my own body because of my physical appearance… I guess you could say ‘the new me’.

When a few months went by, I felt more comfortable in my own skin because I was surrounded by my family and they were able to encourage me to “smile and love your skin”. Most importantly, my Christian faith and reading inspiring books gave me new insight on my life. The “new Marian” started talking about my story to inspire others. Turning a negative situation into a positive one. The more I spoke about my scars, the more confident I became because it was impacting the life of another person. 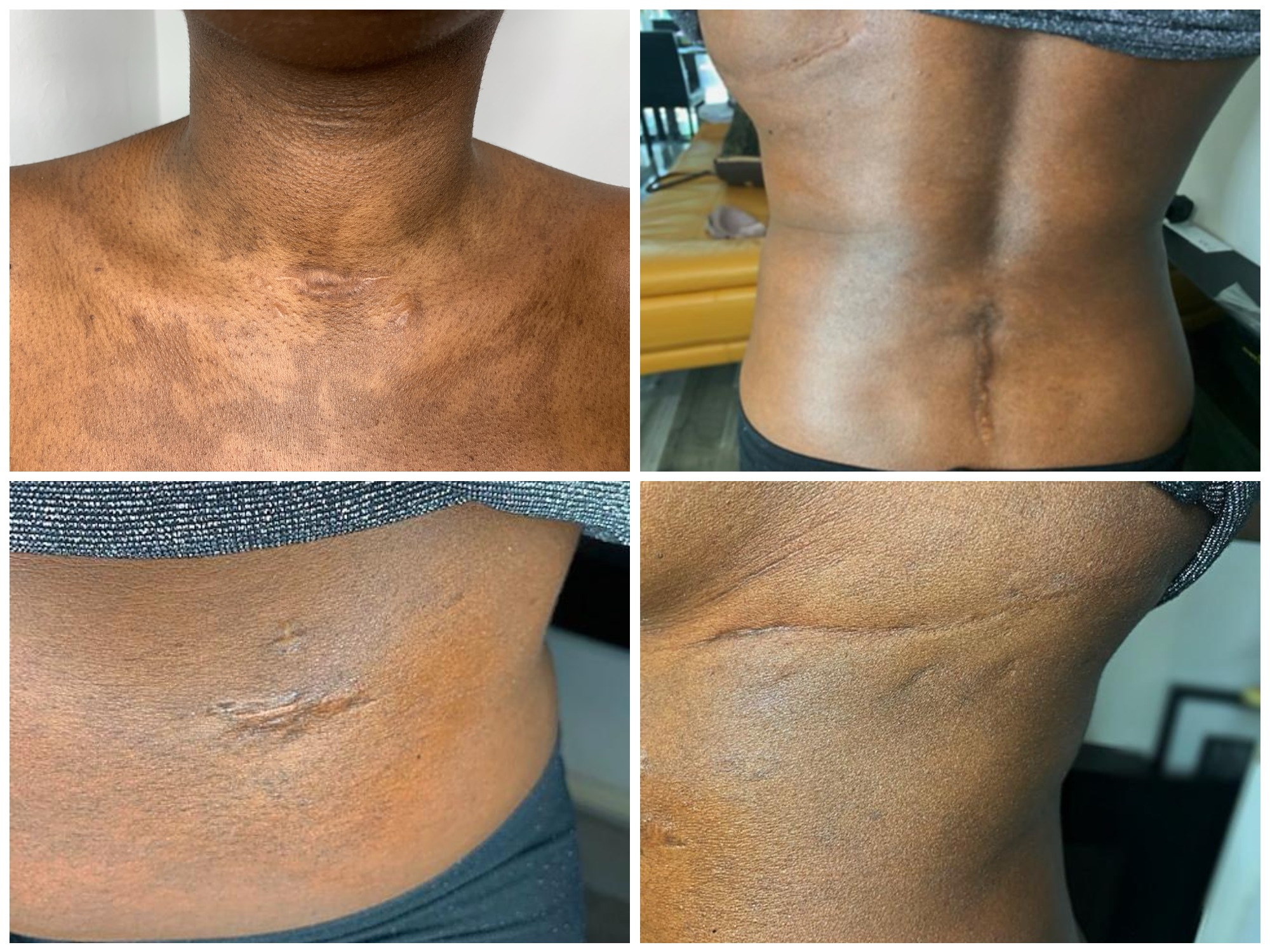 Marian shows her scars to help people with visible differences embrace their own skin.

In 2018, someone decided to compose a poem about my scars. It inspired me, and when I was looking at myself in the mirror I was thinking to myself about how my scars tell a story. I started to think about how I could use my story to help people with scars and other visible differences who may feel ashamed or hide away because of a lack of confidence or self-esteem.

Now in 2020, I have finally come to share my project which celebrates people with scars and their stories. Seeing anyone with a visible difference portrayed positively involves a lot of searching, and even more so to find someone who looks like me. Personally it’s important that my project represents people of colour. I don’t see myself reflected in what’s out there – from brand campaigns even through to diversity being represented in the medical sector.

By showing my scars, I hope to encourage children, women and men with visible differences to embrace their skin and love themselves. I’m asking people to join me and share an image of themselves and their scars on Instagram, using the hashtags #MYSKIN #MYSCARS #MYSTORY because they each tell an important story.